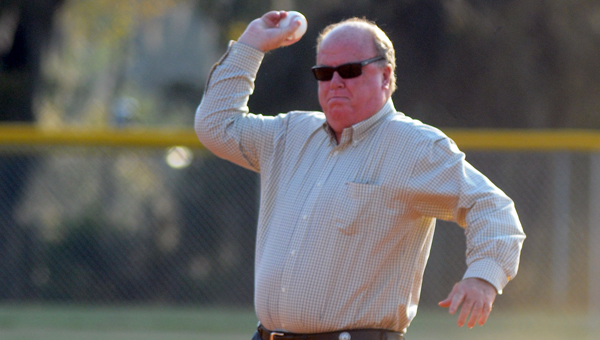 Gregg Fuller has been a part of his fair share of opening day ceremonies.

For the most part little — besides the names of the players — changes. The teams are introduced. There’s a ceremonial first pitch. One team picks up its first win. Another gets its first lose.

But Tuesday night’s Dixie Youth opener was different from the others.

“I was standing on the mound with (Mayor) Dexter (McLendon) as they were calling out the kids’ names and at the same time we looked at each other said, ‘This is weird,’” said Fuller, Greenville Parks and Recreation Department interim director.

It wasn’t the ceremony that was out of the ordinary. It was the location.

The change was in location came about after GPRD made the decision to move from standard Dixie Youth baseball to Dixie Youth “O” Zone.

“It feels strange for Dixie Youth to be playing anywhere but Day Park,” Fuller said. “While I’m a little apprehensive about the change, it’s exciting that we’re doing something new.”

Players can also use bigger barreled bats, which was one of the reasons officials with the GPRD opted to move the league from Day Memorial Park to Beeland Park.

“Those bats have a lot more pop,” Fuller said.

At Day Memorial Park the distance to the outfield fences from home plate are 200 feet and 185 feet. “O” Zone organizers recommend leagues play on fields that have a fence at least 225 feet from home plate.

“We just decided that as much as we liked the idea of keeping the league at Day Park, if we were going to make the switch to this new league, we had to move to Beeland Park,” Fuller said.

And Fuller said not switching to “O” Zone wasn’t really an option.

“Everyone is going to it,” he said. “The big push came eight or nine years ago when bigger towns like Dothan, Enterprise and Troy went to it because they had so many kids playing travel baseball and they wanted to play that same brand of baseball in their rec leagues that these kids were playing on the weekends. We held off. We liked the brand of baseball we were playing, and we had a good six to nine team district. Then we found ourselves in a four-team district last year and this year with Luverne moving to ‘O’ Zone it was going to be a three-team district.

“This wasn’t something we just jumped into. We’ve talked about it for years, and the day finally came when it was the right thing for us to do.”

Fuller said the league is off to a good start.

“We had a lot of scoring that first night. Maybe it’s the extra four feet the batters have to pick up the ball,” he said with a smile.

“It was fun. It was different not being at Day Park, but we’ll get used to it. Like I said, it’s exciting for us to be doing something different. We have some really good coaches in the league, and the kids seem to be enjoying it.”