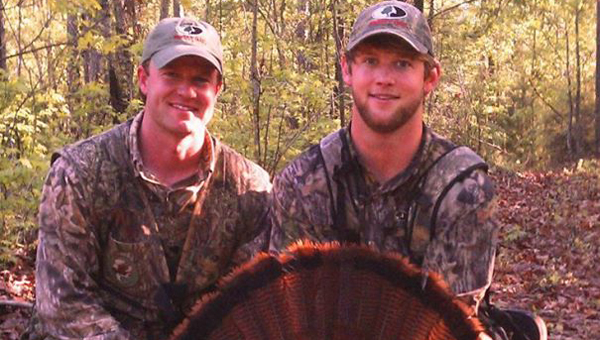 It certainly was for one Butler County hunter.

Lowe, who recently finished in the top 20 at the National Wild Turkey Federation Grand National Calling Championship, and Harsh won $600 for a bird that scored 67.225 on the Southern Land Brokers scoring system.

“The whole morning we were kind of on turkeys, but never could close the deal,” Lowe said. “We hunted one piece of property until around 10 a.m. and decided that we needed to try something different.”

With two hours until the weigh-in, Lowe and Harsh, who were hunting in Lowndes County, switched locations.

“We saw a turkey strutting and some hens in a field, and were able to position ourselves in front of them in the direction they were feeding,” Lowe said.

“I called to him a few times and we were able to kill him around 10:50 and get back to the rodeo with about 11:45. We were cutting it close, but we got lucky and got it done, and got a little money for it. It’s the first time I’ve ever been paid for killing a turkey.”

The event was sponsored by the Southern Land Brokers and hosted by Trey Harrell and Jon Dyer at Harrell and Sons Farm in Hayneville.

Little said he and Elijah did their hunting in Lowndes County. He said he killed the first-place bird with a body weight of more than 23 pounds.

“We had a good time and it was good hunting,” he said. “The turkeys were gobbling early.  We got in there and killed both of them (for Best Double). We had a good hunt. We got lucky.”

Adam Vickory and Robin Hagood claimed third place with a bird that scored 66.175.

“I thoroughly enjoyed the turkey rodeo,” Johnson said. “My partner Randy Bozeman and I had some success. We killed a nice bird. It’s a good opportunity for turkey hunters to get together and celebrate all the outdoors and joys of turkey hunting. It’s a great event for Lowndes County.”

Two-time world turkey calling champion and Evergreen native Eddie Salter also made an appearance at the rodeo taking time to teach children to use a mouth call. Salter has won more than 60 turkey calling competitions since 1981, including six Alabama state championships. In 2009, Salter was inducted into the Legends of the Outdoors National Hall of Fame.

“We had a good turnout,” Harrell said. “Everybody had a good time, killed a lot of turkeys, and got to meet Eddie Salter. Everything just went real well.”

Fred Guarino contributed to this report.