Tigers come up a hit short against Goshen 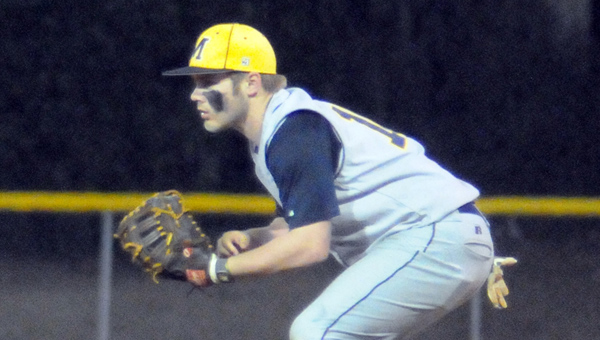 McKenzie School’s Jeffrey Fuller led the Tigers’ charge at the plate with a 1-for-3 effort that included two RBIs in a 4-3 loss to Goshen High School Monday. (Advocate Staff/Andy Brown)

“I told the guys in close games, which we have been on the losing side of some this year, every pitch is magnified,” Norris said. “When you don’t do the simple things like sprinting out of the box to have the chance to get a double instead of a single it hurts. We have to get the little things done in close games.”

The Tigers (2-7) had an opportunity to win the game, but came up a hit short.

“We had the game tying run on third and the winning run on second we just didn’t get the job done,” Norris said. “I was happy with the effort. I just needed a little more.”

Jeffrey Fuller led the Tigers’ charge at the plate with a 1-for-3 effort that included two RBIs.

Harper Vinson was 1-for-3, Roscoe Moorhead was 1-for-3 with an RBI, and Condie Pugh and Jackson Vickery were 1-for-2 and 1-for-3, respectively.

The Tigers scored a 12-2 win over Highland Home High School earlier on Monday.

Vinson finished that game 3-for-3, while Pugh and Chris Shufford each went 2-for-3. Shufford also drove in a run.

McKenzie will face Greenville in the first round of the Butler County School System Baseball Tournament Friday at 2:30 p.m. in Georgiana. The Tigers will then face Georgiana on Saturday at 1p.m.