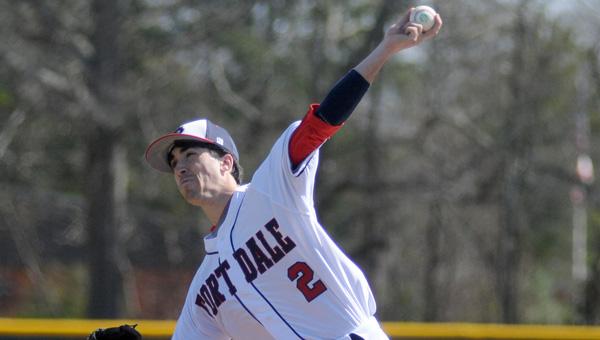 On Saturday, Fort Dale Academy had both.

In the first of two games, the Eagles rode the arm of left-hander Austin Vickery to an 11-0 win over Eastwood Christian Academy.

Vickery allowed four hits and struck out eight in five innings of work to earn the victory.

“Austin has come out and thrown really well in two appearances this season,” Fort Dale head coach Josh Beverly said. “He is throwing strikes and throwing with a lot of confidence.”

The Eagles (4-1) managed just six hits in the win.

Vickery finished with a pair of singles, while Chase Whiddon belted a double and Blake Harris and Caison Elliott each collected singles.

Whiddon and James Burkett each had an RBI.

“We didn’t hit the baseball very well, and Eastwood was a little down, so I think we lost focus early,” Beverly said.

Beverly said the Eagles hit the ball much better in Saturday’s showdown with Hooper Academy.

“We finally hit the ball like we are capable of against Hooper,” he said. “We got good pitching, but played terrible defense. But it was a good win over a Class AAA team.”

Ryan Burkett led the charge at the plate. He was 4-for-4 with a double.

Harris was 3-for-3 with a two-run homer run, and Whiddon was 2-for-4 with three RBIs.

Burkett also earned the win on the mound, while Drake Cabe was credited with the save.