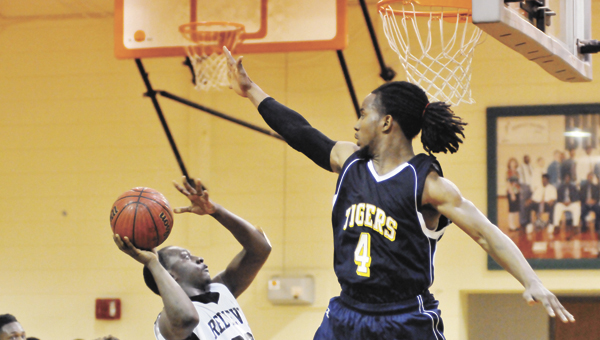 “We played hard,” Catrett said. “They battled back. We should’ve finished up the ball game at the end of regulation there, but we didn’t do it.”

That pressure led to 14-0 run, which was sparked by good inside play and made shots from mid-range.

McKenzie, who had the look of a different team, bounced back and played good defense down the stretch to force RLS to miss three shot opportunities at the rim with time expiring in regulation, where it ended at 42-42.

During OT, Red Level gave away too many balls, and McKenzie drove the paint untouched while holding out in the end for the win during the first game of the Class 1A, Area 3 tournament.

“We didn’t take care of the fundamentals as well as we should have,” Catrett said about the extra time period.

McKenzie started overtime with two foul shots to take a 44-42 lead, and later took advantage on a turnover as Anthony Grace grabbed a rebound off of a missed free throw from Terrance Clemons to get a putback and extra-point play to boot.

RLS answered with a nice pass from senior Marcus Robinson to Chavis Crittenden to cut it to 46-44 with 1:24 to go.

After a timeout, McKenzie guard Condie Pugh drove the paint untouched for a 4-point advantage, and his team led 50-45 a little later after freshman Robert Shufford drove the length of the court for an easy bucket.

Red Level’s Spencer Stallworth, a senior, got an and-1 play, but missed the free shot with 32 seconds left.

Shufford added a front-end of a pair with 6.5 left to ice the game.

While playing from a deficit, RLS could’ve folded the game to McKenzie, but it didn’t, Catrett said.

“You’ve got to be proud of how the boys battled,” he said. “They could’ve folded it up, but they battled.”

In the fourth period, the massive run was sparked when Crittenden got a jumper with 6:57 left on the clock.

RLS senior William Crawford then got a putback for an 8-point deficit; Stallworth got a steal and a dunk; Crittenden got a lob pass to Stallworth for a bucket after a McKenzie turnover; Dameyune Scott drove the lane for a layup; Crawford tied it with a jumper; and Stallworth added another steal and layup to give RLS its only lead of the game.

“We changed up defensively and went man, and put more pressure on the ball,” Catrett said. “We tried to take their ball handlers away to give us back the basketball.”

Pugh drove the lane again to tie the game at 42-42 with 58 seconds left in the fourth.

RLS drove the court, drained the clock and waited for the right opportunity.

Sophomore Jeffrey Perdue put up a missed jumper; Crawford got an offensive rebound and tried to put it back up; and Stallworth missed the tip in for those three missed opportunities late.

All night, McKenzie had the game in its hands on the offensive end as they grabbed essential boards for cutbacks.

McKenzie increased its lead to 32-21 when Nicarius Peterson and Pugh made back-to-back layups off good ball movement in the paint.

To end the third, Stallworth got back to back steals to cut it to 36-27 going into the fourth.

The first half was keyed by two 3-pointers by McKenzie’s Harper Vinson.

Late in the second, RLS again gave the ball up and missed too many free throws to trail 23-11 at the break.

“We let them have too many second-chance opportunities on their end, and we didn’t box out like we should have,” Catrett said. “They played hard. I told them at halftime you’re going to have off nights offensively, but you can’t have them defensively. We had too many breakdowns by halftime. Once we started playing blue collar like we were supposed to (in the fourth period) and started putting pressure, that’s when things started going our way.”

Stallworth, who was the leading scorer all season for RLS, scored 22 points and had seven rebounds in the loss. Crawford and Crittenden chipped in six points each.

Grace led McKenzie with 12 points. Pugh chipped in 10, and Vinson had nine.