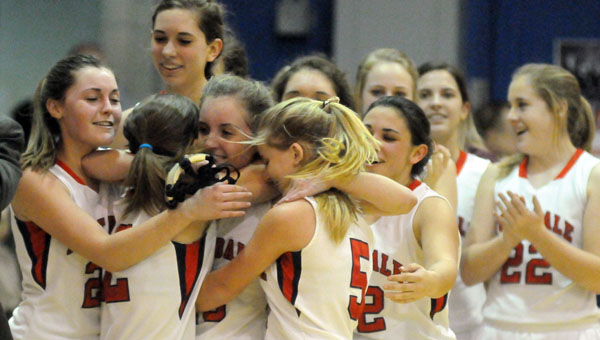 The Lady Eagles scored a 51-39 win over Escambia Academy and secured the No. 1 seed in the AISA state tournament, which begins Friday at Huntingdon College.

The Lady Eagles led the entire game, staking claim to a 20-7 advantage in the first quarter en route to the win.

The Lady Eagles’ Saturday matchup with Tuscaloosa Academy was short on scores, but there was no shortage of thrills as Fort Dale hung on to a narrow 26-23 victory over the Lady Knights to earn a spot in the title game.

Fort Dale capitalized on a number of turnovers to jump out to a quick 6-0 lead, and Scott made for an easy target down low with a noticeable height advantage over defenders.

The Lady Knights would whittle away at the lead in the second quarter, however. But Perdue brought the Lady Knights’ momentum to a screeching halt with a clutch three-pointer that sent the Lady Eagles into halftime with a comfortable six-point lead.

Both teams struggled to put together anything offensively in the second half, however, as five total points were scored in the third quarter.

Addison Harrison brought the Lady Knights back to life in the fourth with a couple of steals and a few trips to the free throw line, eventually securing a one-point lead for Tuscaloosa Academy with two minutes to go.

With the game and tournament finals hopes on the line, Perdue pushed ahead of the Lady Knights’ defense the length of the court for an uncontested lay up to give Fort Dale a 24-23 lead with a minute and 41 seconds remaining.

Key defensive efforts, including a block from Scott and a steal from Nedra Toulmin Crosby with six seconds remaining, would seal the victory for the Lady Eagles.

Scott and Crosby were named to the all-tournament team. Perdue was selected as the tournament’s MVP.

The Lady Eagles will open play at the state tournament Friday against Springwood. The game is slated to begin at 3 p.m.