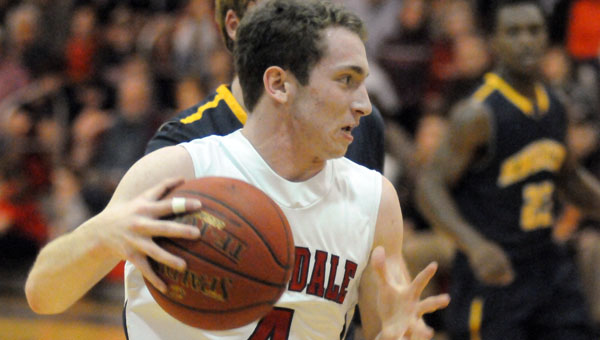 The Fort Dale Academy home crowd carried their Eagles to victory in the face of some serious athleticism Saturday as the Eagles toppled the Kingwood Christian Lions 75-67.

The Lions came out swinging, however, with back-to-back buckets and a thunderous dunk from the 6-foot-5 Kingwood superstar center C’yontai Lewis to jump out to an early 6-0 lead.

But two early fouls made Lewis a non-factor for the remainder of the quarter as FDA’s Chip Taylor and John Coleman Poole pieced together a comeback to tie the game at the end of one.

Fort Dale took the first lead of the game with an early attack beyond the arc from Taylor Thomas, followed by a hail of threes from Ryan Burkett to head into halftime with a nine-point lead.

The Fort Dale crowd completely rattled Kingwood in the second half, culminating in a pair of technical fouls and even more foul trouble for Lewis, despite his otherwise strong start to the third quarter offensively and defensively.

Meanwhile, the Eagles were firing on all cylinders, taking advantage of Kingwood’s lax defense in the paint, and made the Lions pay with a number of trips to the free-throw line, extending the lead to 16 heading into the final quarter of play.

Sixteen of Taylor’s 40 points came from the charity stripe, breaking his own record of 15 made free throws from last year.

And despite a remarkable effort from Lewis to will the Lions back into the contest, the deficit from the second and third quarters was too much to overcome.

Taylor led all scorers with 40 points, and Lewis led Kingwood with 35 points.

With the win, the Eagles advanced to the title game of the Class AAA, Region 2 tournament, but fell short as Tuscaloosa Academy scored a 61-45 victory Monday night.

Taylor once again paced the Eagles with 24 points.

He was the only Eagle to reach double figures.

Taylor and Burkett were named to the all-tournament team.

Fort Dale is the No. 2 seed in the AISA state tournament. The Eagles will play Lee-Scott Academy at 1:30 p.m. Friday at Huntingdon College.