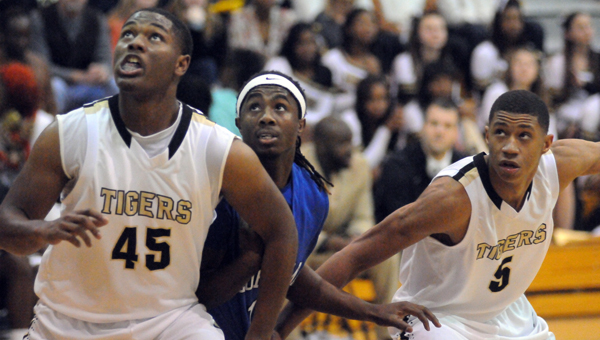 Sequels rarely live up to the standard of the original.

That was certainly the case on Saturday night when in-county rivals Greenville High School and Georgiana School met on the hardwood.

In the teams’ first meeting of the season back in December, the Tigers squeaked out a 69-66 victory that was in doubt all the way until the final horn sounded.

On Saturday, Greenville made sure the sequel had a predictable ending.

The Tigers (12-7) raced out to a 15-5 lead during the first five minutes of the contest. By the close of the first period, the Tigers led the Panthers 21-9.

“I knew that we were ready to play when I walked into the locker room before the game,” said Greenville High School head coach Richard Kelly. “There was complete focus, and that resulted in our fast start.”

The Panthers (15-8) opened the second period with a 5-0 run in the first two minutes of play to cut Greenville’s lead to nine points, but managed just three points for the remainder of the stanza. By the intermission, Greenville led 36-17.

Georgiana head coach Kirk Norris said the Panthers, who entered the contest coming off a 62-55 win over area rival J.F. Shields High School, struggled to find a rhythm early in the game.

“Greenville has a very good team and they are a tough matchup,” Norris said. “They played well on defense and it took us a while to get going on offense.”

Greenville outpaced Georgiana 19-12 in the third period before the Panthers got on track offensively in the final period of play.

Georgiana’s Richard Boggan led the charge with 18 fourth-period points. He finished with a game-high 24 points.

Travales Smith also helped spark the rally with timely rebounding and by forcing several turnovers during the final eight minutes of play. Smith finished with 13 points.

“Richard and Travales have done a great job defensively for us this season, especially rebounding,” said Norris. “They both had good offensive performances the other night and hope they can continue to be consistent on the offensive end.”

The Panthers cut Greenville’s lead to 12 points with 2:28 to play, but were unable to draw any closer.

“We kept fighting and our kids never quit,” Norris said. “We finally got in a rhythm late but unfortunately time ran out on us.”

“Zac played well, and I was very proud of him,” Kelly said. “He has developed into a strong player for us. He took smart shots, and shot the ball extremely well when given the opportunity.”

DaBryant Crenshaw added 14 points for the Tigers, and Raheem Moore finished with 12 points.

Both teams were in action Tuesday night. Results were not available at press time.

Greenville will be back in action Thursday when it travels to face Demopolis High School. The game is slated to begin at 7:30 p.m.

Georgiana will be back in action Friday when it travels to Brantley High School. That game is set to begin at 7:30 p.m.