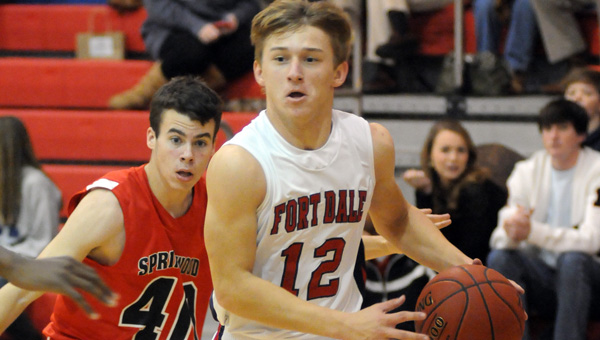 Taylor reached the milestone Thursday night during the Eagles’ 62-56 win over Hooper Academy in Hope Hull.

The Greenville native scored a team-high 24 points in the victory on the strength of a 7-for-16 effort from the field. He also connected on 10-of-15 free-throw attempts. It was a free throw in the first quarter of the contest that gave Taylor his 1,000 point.  He also pulled down a team-best 13 rebounds to record a double-double.

The win came on the heels of a 50-42 road win over Escambia Academy on Tuesday.

Taylor and Burkett led the Eagles with 15 points each. Thomas chipped in 14 points.

Fort Dale (11-8, 3-0) will be back in action Tuesday when it travels to Morgan Academy. Junior varsity action begins at 4 p.m.

Fort Dale converted 6-of-6 free throw attempts in the final 1:22 of its contest with Hooper Academy to score a 39-33 win Thursday night in Hope Hull.

Ashton Scott led the Fort Dale offensive charge with 16 points. She was 7-for-12 from the field and 2-for-4 from the free throw line.

AnJoy Castleberry scored nine points and sank the Lady Eagles’ only three-pointer. She also had four assists and three steals.

Hannah Johnson had six points, four rebounds and four steals in the victory.

The win was the second in a row for Fort Dale. The Lady Eagles defeated Escambia Academy 42-32 on the road Tuesday night.

Johnson notched a double-double with 11 points and a team-best 14 rebounds.