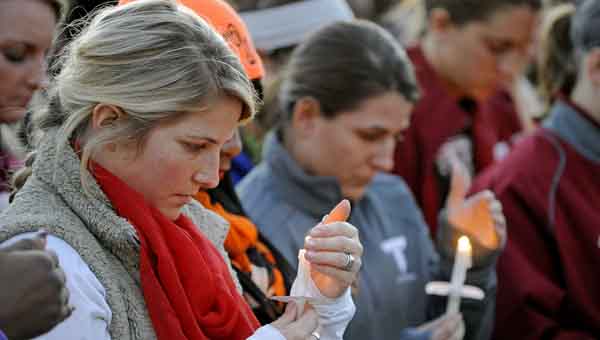 Hundreds gathered on Troy University’s Bibb Graves Quad to mourn the loss of four Trojans who died during the school’s holiday break.
“Today we have gathered as a single community to honor those who have died when so much of their lives were ahead of them,” said Faculty member Joe McCall.
Haijiao Sun died Dec. 21 from injuries he sustained in a car crash shortly after graduating from Troy Dec. 13.
Kimberle Johnson was shot in a Montgomery nightclub while celebrating her birthday.
Kristin Fuller was shot at a New Year’s party and Jadarius Garner was found dead on a Mississippi highway.
Wednesday’s candlelight vigil included prayer, poetry and readings from university officials and students that focused on moving on from the tragedies.
One theme flowed through the evening: embrace each moment because you never know which will be your last.
Pastor Elijah Shafar of St. Paul’s AME Church compared each second to a dollar bill. People are given $86,400 a day and have to spend each one before they can start a new day.
“In each and every day we have 86,400 seconds,” Shafar said. “Since we don’t know when God will call our name, we must take advantage of every 86,400 moments we have in a day.”
McCall continued the thought.
“Death reminds us how priceless life is,” McCall said.
He asked students to become a legacy of their former classmates’ spirits.
“You’re still here and can do miraculous things in their honor … a helping hand, a kind gesture, an enthusiastic smile,” he said. “Today, we are called to remember our friends. But, it is time to let them go.”