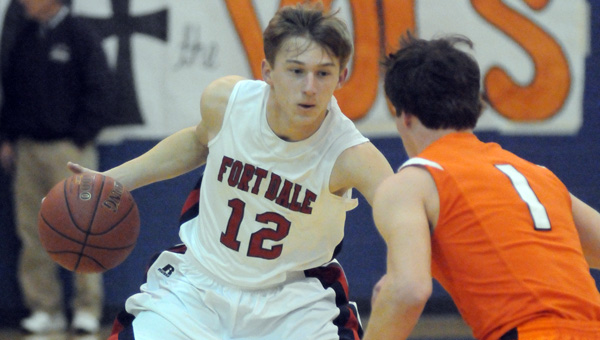 Fort Dale Academy senior Chip Taylor knew he was having a special game.

He just didn’t know how special.

Taylor scored 41 points Tuesday night in the Eagles’ 67-49 win over Morgan Academy en route to setting a new school record for points in a single game.

The previous record was 35 points, which was set by Ben Campbell.

“I had an idea I had scored a good amount (of points), but nowhere near the 41 I finished with,” Taylor said. “It was a fun game and I had a lot of open shots due to some good passes and defensive stops by teammates.”

Taylor made the most of his opportunities.

He connected on nearly 52 percent of his shots (14-for-27), including 3-of-7 attempts from beyond the arc. He also converted 10-of-14 free-throw attempts.

“I’ve personally never had a game where shots have fallen like they did on Tuesday, and to get a big area win felt good,” said Taylor, who missed recording a double-double by one rebound.

The Eagles followed their win over Morgan with a 57-43 win over Monroe Academy on Thursday.

“We made some defensive changes in the second half that allowed us to pull away with some key stops,” Taylor said. “Winning two area games this week really puts us in a good situation to finish first in the area and receive a spot in the state playoffs.”

Taylor once again led the way for Fort Dale with 21 points.

Burkett added 13 points on the strength of a 4-for-10 shooting performance.

Thomas and Michael Padalino each scored six points, while Hudson Branum and John Coleman Poole added four points each for the Eagles. Hayden Davis finished the contest with three points.