Tigers tie for second at tourney 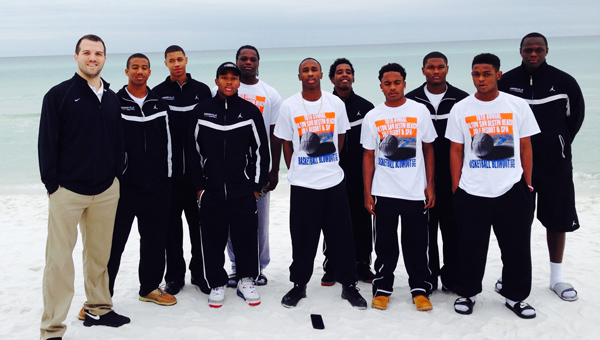 A trip to the beach left little time for rest or relaxation for Greenville High School as the Tigers traveled last week to compete against 15 other teams in the 19th annual Hilton Sandestin Resort Tournament.

After suffering a loss to Lexington High School of South Carolina, the Tigers managed to fight to a tie for second place after winning the consolation game against the Florida-based Walton High School.

Lavarus Peagler, DaBryant Crenshaw and Marvin Davidson missed the first game due to the Max Emfinger All-Star football game in Panama City, Fla., but the Tigers quickly rebounded to climb the tournament ladders for a consolation championship finish against Walton High School.

Zac Smith and Javarrius Cheatham led the charge in games two and three with a couple of convincing wins against White Plains and Bayside Academy.

Greenville head coach Richard Kelly said that the opportunity to travel and play several teams from surrounding states was a greater prize than any trophy.

“I always enjoy getting away from home and playing basketball for a few days,” Kelly said. “This tournament gave these young men the experience of a lifetime.  Staying at the Hilton resort directly on the beach rewards their hard work. We grew, and even in the game where we (only had) five players, those boys were determined to finish this tournament the right way. Playing teams that we have never seen before allows us to adjust to different looks.”

But despite running away with each of their wins by a margin of 18 points or more, it was the Tigers’ defense that set the pace for much of the tournament, including the 79-61 victory over Walton High School for the second-place finish.

Davidson finished the night with 27 points and Cheatham put up a game-high 30 points, earning a spot on the all-tournament team in the process.

“I was so proud of the way that they finished,” Kelly said. “Playing hard on defense allowed (us to score) easy points.  Now we have to get ready for a tough and crucial month of January.”

Greenville will face off against Sumter Central at home Friday starting at 5 p.m.