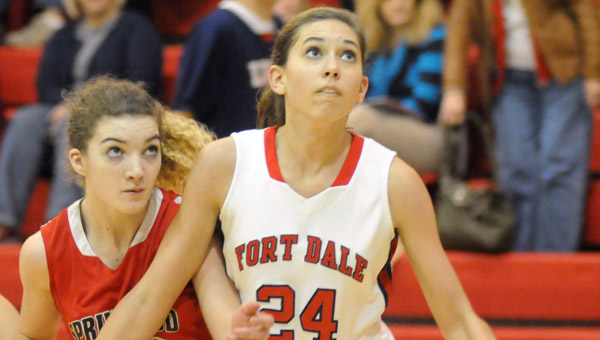 A fourth period rally by No. 10 Fort Dale Academy came up short Friday night as the Lady Eagles fell 44-38 to top-ranked Lee-Scott Academy.

The Lady Eagles (5-4) trailed 23-18 at halftime after scoring just six points in the opening period. After a sluggish start to the second half, which once again saw the Lady Eagles score just six points in a period, Fort Dale rallied to outpace the Lady Warriors 14-6 during the final eight minutes of play. But it was too little too late, as the Lady Warriors were able to hang on for the win, thanks in part to Fort Dale turnovers.

The Lady Eagles, who outshot the Lady Warriors 53.6 percent to 32.1 percent, committed 33 turnovers in the loss.

Ashton Scott added 10 points and four rebounds for the Lady Eagles. Scott was 4-for-7 from the field and 2-for-2 from the free-throw line.

Nedra Toulmin Crosby scored six points on the strength of a 3-for-4 effort from the field. She also yanked down a team-high nine rebounds.