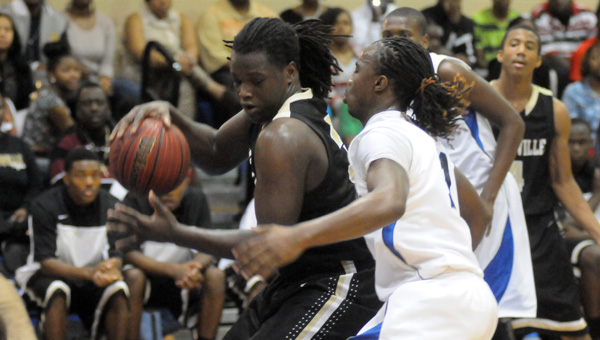 It was a battle of size versus speed.

In the end, the size of Class 5A Greenville High School won out in a showdown against in-county rival Class 1A Georgiana School.

“(Georgiana) is a really good team,” Greenville head coach Richard Kelly said. “What a great game. We are blessed in Butler County to have a game like that between two really good teams. It was fun.”

Greenville staked claim to a 21-14 lead by the close of the first period, in large part to a dominating inside presence and timely shooting from beyond the arc. But in the second period, Georgiana was able to control the game’s tempo and outpaced the Tigers 18-16 to trim Greenville’s lead to five points, 37-32.

“We were able to force the tempo to a higher pace and it helped,” Georgiana head coach Kirk Norris said. “They have such an advantage inside that we tried to make their bigs run as much as possible.”

In the second half, Greenville tried to slow the tempo.

“They ran the floor well in the first half, “ Kelly said. “We made some adjustments at the half and forced our defense to stop their transition points.”

Despite the adjustments made by Greenville, Georgiana continued to chip away at the lead and closed the third period trailing by just two points, 51-49.

The rally was sparked in part by the rebounding and defense of Richard Boggan and Travales Smith.

“I thought out kids competed and played extremely hard,” Norris said. “Richard and Travales have done a great job all year of playing up to and against bigger opponents. It says a lot about the heart and grit that both guys have and play with.”

The Panthers had three chances in the final minute to tie the game with a three-pointer, but were unable to connect.

“They shoot so well from the outside I wanted to try and keep it a two possession game and eliminate a tie,” Kelly said. “I was proud of the way we stepped up at the end of the game defensively.”

Norris said: “We had two good looks to tie in the closing seconds, and the shots just didn’t fall.”

Raheem Moore had 14 points and six rebounds for the Tigers, while D’Raylen McGrew chipped in 12 points and Marlon Davidson added 11 points.