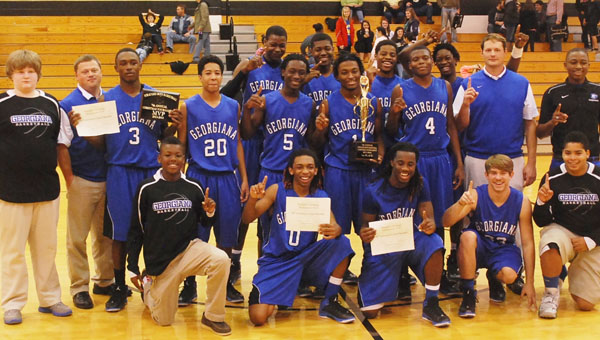 Georgiana School forward Richard Boggan had 10 points and 12 rebounds in the championship game of the Straughn High School Christmas Tournament on Saturday.

None were bigger than his final rebound and his last two points.

Boggan’s final basket in the closing moments of the fourth period gave the Panthers a two-point lead. After a Straughn miss, Georgiana’s Jacquez Payton was fouled and connected of 1-of-2 free throw attempts to seal the 48-45 win and give the Panthers the tournament championship.

“Richard is a very good rebounder and he put himself in position to get the rebound and putback off the missed shot,” Georgiana head coach Kirk Norris said. “They came down and had a shot to tie, we defended well and got the rebound with around 10 seconds left and Jacquez made the second of two free throws to give us the three point lead.”

Payton, who was named the tournament’s MVP, finished with 17 points.

Devin McMeans, who was named to the all-tournament team along with Travales Smith, scored eight points in the win.

“It is always good to win a tournament and I think it will help our confidence moving forward before we start area play,” said Norris. “We didn’t play as well as we had earlier in the tournament, but Straughn has a good team that is well coached. It was a good win for our team.”

Straughn’s Rollin Kinsaul, who was also named to the all-tournament team, led the Tigers with 15 points.

Georgiana (7-1) advanced to the championship game of the tournament by defeating Pleasant Home High School 72-26.

Smith led the charge for the Panthers with 15 points.

McMeans scored 14, while Payton and Boggan finished with 12 points and 11 points, respectively.

Georgiana was back in action Tuesday night against Andalusia. Results were not available at press time.

The Panthers will travel to face J.U. Blacksher High School Thursday before returning home to take on Greenville High School Saturday. Saturday’s action will begin with a B-Team game at 4 p.m. with varsity girls and varsity boys games set to follow.