Hill to compete in PP&K contest in Atlanta 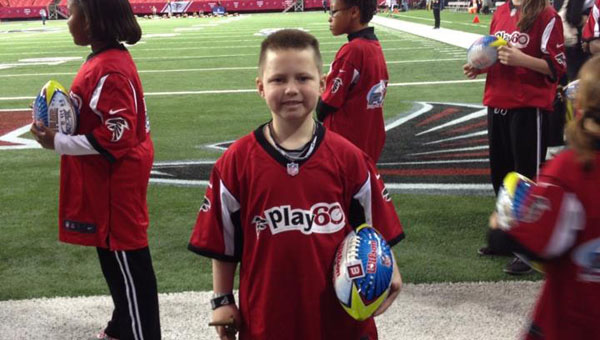 Eight-year-old Christian Hill is making his third trip to Atlanta in as many years for the national round of the NFL Punt, Pass & Kick competition. (Courtesy Photo)

While most aspiring grade-school athletes are playing out their NFL dreams from the confines of their backyards, one Greenville prodigy is gearing up for the real thing Sunday.

Eight-year-old Christian Hill is making his third trip to Atlanta in as many years for the national round of the NFL Punt, Pass & Kick competition.

“He competed at five and he beat the 13-year-olds’ scores here in Greenville, but the problem with that was he was too young to compete at the age of five to go to sectionals.”

But since reaching the qualifying age, Christian has progressed through the local Greenville round and the sectional round held in Dothan in each of the following three years, and he’s passed each round with flying colors.

At this year’s sectionals, he posted a total score of 189 feet, derived from a 64-foot punt, a 71-foot pass and a 54-foot kick, making him one of only four finalists chosen from Alabama, Georgia, Mississippi and Florida to advance in the 8-9 age group.

“I’m most excited about seeing the football players, and getting to meet and talk with them,” Christian said.

But it’s not all business for the competitors and their families.

Forty boys and girls age 6-15 will head to the Georgia Dome at 7 a.m. Sunday morning for the actual Punt, Pass & Kick competition, where the scores will be tallied up and awards presented immediately.

But each competitor and an accompanying parent are invited to return for the 1 p.m. week 15 matchup between the Atlanta Falcons and the Washington Redskins.

During the pre-game, the children will go out after the pros and perform as they did for the actual competition, and at halftime the top scorers in each age group will be brought onto the field and introduced to the players.

And with four months of preparation under his belt, Christian is doing everything he can to ensure that he is one of them.

“Our backyard is marked off with hash marks to show how far he kicks,” his mother added.

Tina said that it’s no small wonder where her son’s enthusiasm for the sport comes from, as he has had a football in his hands for as long as she can remember.

“Even when he was still in diapers, his daddy would holler ‘hut!’ and Christian would go down on the floor and get in a football stance,” Tina said.

“But he’s just really been involved with football all of his life.

“We don’t know where this all came from, but we’re just very blessed to have such an athletic child.”