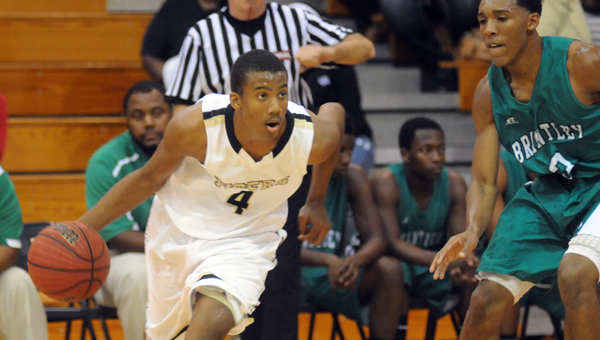 Greenville High School raced out to an early lead, and then held off a late charge by Brantley High School to score a 59-47 win Tuesday night in Greenville.

By the close of the second period, the Tigers had extended their lead to 16 points at 31-15.

But Brantley, led by Wesley Person Jr., wouldn’t go away. The Bulldogs (0-1) scored 17 points coming out the half, including an 8-2 run that sliced into Greenville’s lead.

“They are a very good basketball team, and did some things right out of the half that hurt us,” Greenville head coach Richard Kelly said.

But Greenville was able to withstand the run and put together a run of its own to outpace the Bulldogs by two in the third period.

A 14-11 advantage in the fourth period sealed the win for the Tigers.

Kelly said the key to the Tigers’ win was rebounding.

“Controlling the boards on both sides of the floor brings success to any team,” Kelly said. “We did that tonight.”

Raheem Moore, who scored 14 points, led the way with 19 rebounds. Javarrius Cheatham, who led the Tigers with 18 points, also pulled down eight rebounds, while Lavarus Peagler added six in the win.

“ I was proud of these boys,” Kelly said. “Selfless attitudes keep us going in the right direction. We know that we (still) have a lot of things to work on to be successful.”

Person led the Bulldogs with a game-high 30 points.