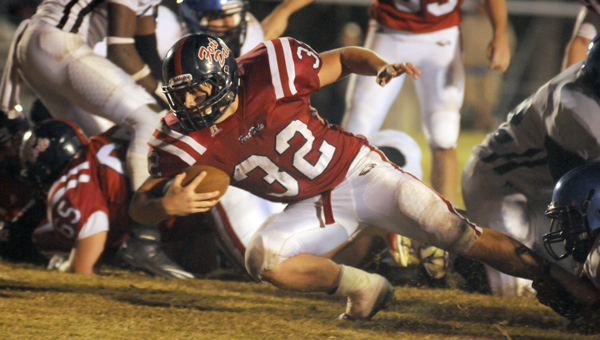 Fort Dale Academy will be well represented when the best of the West tangle with the top players from the East in the 2013 Alabama Independent School Association All-Star football game.

The Eagles, who finished the season with a 6-5 record and were eliminated from the postseason in the first round by Kingwood Christian School, placed four players on the West squad. Only Class AAA state champion Monroe Academy (8) and Wilcox Academy (6) had more players named to the team.

Quarterback Chip Taylor, one of the four Eagles chosen for the squad, said the number of players named to the team is testament to the program that has been built at Fort Dale.

“Fort Dale is one of the best football programs in the state and the consistency to have talented senior classes speaks highly of our school,” Taylor said.

Student coach Boyd Blackmon will serve as an assistant coach on the West squad.

Whiddon said it’s been a longtime goal of his to be named an AISA all-star, an honor reserved for seniors. Like Taylor, he said he believes the number of players chosen off Fort Dale’s team shows the level of talent that Fort Dale is able to field year in and year out. The Eagles had seven players named to last year’s all-star team, more than any other team in the state.

“I was extremely excited to learn that I had been selected to be an AISA all-star mainly because I had been looking forward to it since a young age,” Whiddon said. “I think it says a lot about our senior class (to have four players on the team). Although we had a lot of injuries and hard times this year, we still have a class full of talent.”

Harold and Brooks are eager to see just how the Eagles and their West teammates stack up against the East.

“I believe it will be a great game and I’m anxious to see how the teams match up,” Harold said.

Brooks said: “It will be interesting to see how we stack up against the best players in the AISA.”

According to Taylor, being able to share the experience with his teammates makes it even more special.

“I was excited to find out that I made (the team),” Taylor said. “This is something everyone thinks about since they were little and being on the same team with three others and having Boyd help coach makes it even better.”

The game will be played Friday at Cramton Bowl in Montgomery.