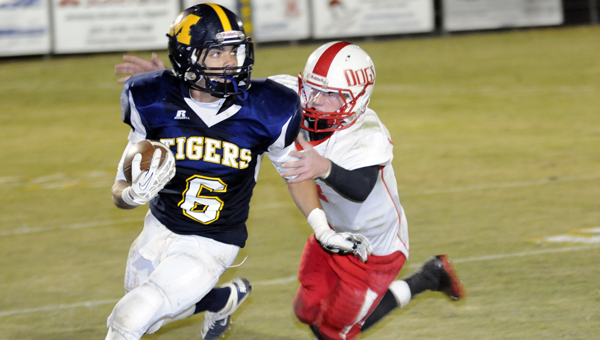 McKenzie School sophomore Condie Pugh and the Tigers will face Linden High School Thursday in the second round of the playoffs. Kickoff is set for 7 p.m. (Advocate Staff/Jonathan Bryant)

The Linden Patriots have a tradition of success.

Opponents of the Patriots have only averaged a meager 10.4 points per game this season, and four of those opponents didn’t score any.

They also finished the season without a single loss in region play, advancing to the playoffs as they’ve done each year since 2004.

Regardless, it’s a winning tradition that the McKenzie Tigers are looking to break Thursday night in the second round of the playoffs.

McKenzie head coach Josh McLendon has no doubts that scoring a win will be difficult, calling the Patriots the toughest opponent that his team has faced thus far.

But when asked about why Linden has had so much success in keeping opponents out of the end zone, McLendon admitted that it probably couldn’t be attributed to any one thing.

“They’re very fast on defense, and they just basically put a lot of pressure on offenses by bringing more people than you can block,” McLendon said. “They tackle really well, they’re physical, and they’re just a good football team overall.”

The Patriots offense operates largely out of the Wing-T formation, and what it lacks in flash is more than compensated for with consistent productivity. Linden averages a little more than 39 points per game.

And while the second round of the playoffs has left relatively little time to prepare for the challenges ahead — the Thursday night game and Veterans Day combined to make a short practice week — McLendon argued that it’s something that all teams are going through.

“They had the same amount of time to prepare as we did; it’s all about how you use that time and how you go about it,” McLendon said. “If you want to go deep into the playoffs, you have to deal with things like that. You get to the fourth round and it’s on Thanksgiving, and that’s just a part of it. We’re going to go and do what we always do —we’re going to play football.”

The Tigers will travel to face Linden. Kickoff is set for 7 p.m. Thursday.