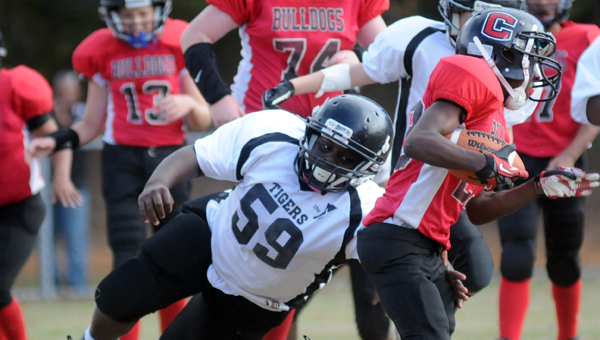 Greenville’s Jamar Jackson lunges to make a tackle during the Tigers’ 19-6 win over Crestview Saturday in the Pee-Wee Super Bowl that was held at the Greenville YMCA. (Advocate Staff/Andy Brown)

It was a strange case of déjà vu for the Greenville Pee-Wee Tigers this Saturday at the Tri-County Football League Super Bowl was held at the Greenville YMCA.

Despite meeting the same team, Crestview (Fla.), at the same place and under identical circumstances (coming off an undefeated regular season), the Tigers changed the outcome of the last year’s meeting by walking away with a 19-6 victory and the first place finish in league play.

And though the number of causes for celebration were many after the big win Saturday, head coach Jason Posey said that the biggest of all rested with the memory of Amanda Phillips, former executive director of the Greenville YMCA.

“Mrs. Amanda Phillips was the director at the time (of our last meeting), and we kind of let her down,” Posey said. “But we dedicated this whole season to her — another undefeated season but this time with a Super Bowl win — so that’s why it’s kind of personal to me.”

The Tigers faced a Crestview team that had managed to score with little to no interference for much of the season, including an earlier meeting between the two where Greenville came out ahead by a nose in a tight 34-33 overtime win.

The Tigers trimmed the 33 points scored in this season’s first meeting to just six on Saturday, and Posey attributed the focus on defense to a very disciplined week of practice and an eagerness to learn.

“My saying is that offense sells tickets, but defense wins games, and at the end of the day the defense did make some big goal line stands inside the five yard line,” Posey said.

“On several occasions, they stood up for me in there and I’m very proud of those guys for that.  They were focused and ready to go all week.”

Even though this year’s season has drawn to a close, Posey believes that the drive and determination that the team displayed will continue for years to come.

“They are some disciplined kids, and their mindsets are set on winning,” Posey said.

“They have a lot of emotions for the game of football, and I believe that they can do the same thing this upcoming season if their mindsets stay the same. I have a lot of confidence in them.”