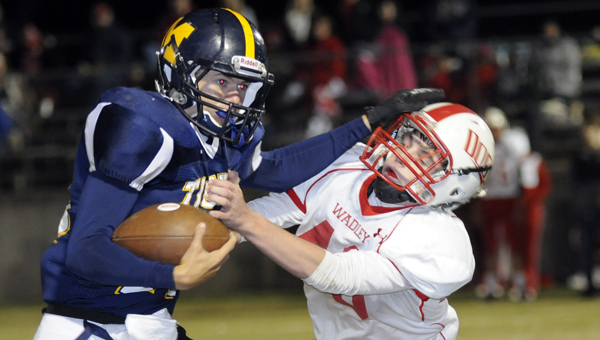 McKenzie School quarterback William Brown fights off a Wadley High School defender during the Tigers’ 63-12 win Friday night in the first round of the AHSAA playoffs. (Advocate Staff/Jonathan Bryant)

Even the coldest night of the season wasn’t enough to slow down a blistering McKenzie offense as the Tigers steamrolled the Wadley Bulldogs for a 62-13 win.

A number of McKenzie quarterbacks, including returning senior Terrance Clemons, were perfect on the night with a balanced offense both on the ground and through the air that left Wadley unable to respond.

But it was the clutch defensive plays of the first half that sealed the Bulldogs’ fate, including three interceptions — two of which taken all the way back for touchdowns —and a crucial strip from linebacker Jay Womack that set up the Tigers’ very first score with excellent starting field position.

“I thought our defense played great — they got some early turnovers and that built the momentum,” said McKenzie head coach Josh McLendon. “And that kind of took some pressure off the offense, but I thought we played well on all phases of the game.”

Sophomore running back and linebacker Kamaury Avery was a focal point for the Tigers going into the week, but a physical McKenzie defense held the Bulldogs backfield in check for much of the night.

Avery launched a last ditch effort to answer McKenzie’s unmanageable lead by powering down the sideline for Wadley’s first score of the game with 12 seconds left in the first half, but it was a case of too-little, too-late for the Bulldogs.

For McLendon, the convincing win was less about sending a message and more about setting the pace for the remaining four rounds of the playoffs.

“You’ve got to win the first one, and with what I’ve been told, the first round is the toughest round,” McLendon said. “And after you get in these other rounds, anything can happen, so we’re just happy to be where we’re at and we’re going to continue to work hard and see what happens.”

McKenzie advances to the second round next Thursday night, where the Tigers will face the Linden High School in Linden.