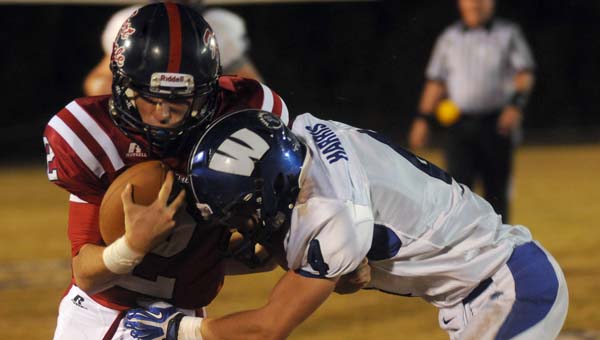 Fort Dale Academy sophomore quarterback Austin Vickery is drive out of bounds during the Eagles’ 42-14 loss to Wilcox Academy Friday night. Vickery was 5-for-16 for 125 yards and a touchdown in the loss. He also threw two interceptions. (Advocate Staff/Andy Brown)

Fort Dale Academy has become accustomed to scoring points in bunches as its opponents look on helplessly.

On Friday night, the ninth-ranked Eagles found themselves on the other side of the equation.

Wilcox Academy (7-4) reeled off five straight touchdowns to break a 7-7 tie and seize a 42-14 win in Greenville.

“We didn’t tackle well,” Fort Dale head coach James “Speed” Sampley said. “Not to take anything away from Wilcox, but we didn’t play well. We’ve got to get better on defense. Next week is do or die.”

Next Friday the Eagles open the postseason at home against Kingwood Christian School.

They’ll carry a three-game losing streak into that contest.

The Eagles, who started with game with seven key players out of the lineup, lost two more during the course of the game when senior Trent Brooks went down with an injury in the first quarter and junior Sawyer Kendrick went down late in the second quarter.

“We had a lot of guys out, but that’s no excuse,” Sampley said. “People get hurt playing football. The ones who are out there playing have to make plays.”

Fort Dale (6-4) struggled to make plays on offense in the loss.

The Eagles averaged 38.6 points per game entering Friday’s contest. Against the Wildcats, Fort Dale managed just one offensive score — a 68-yard touchdown pass from sophomore quarterback Austin Vickery to junior running back Ryan Burkett with 8:29 to play in the second quarter.

Vickery was 5-for-16 in the contest for 125 yards. He also threw two interceptions.

Burkett caught three of those passes for 93 yards.

“We didn’t get anything going on offense,” Sampley said. “Wilcox just pushed us all over the field. They manhandled us. They did what they wanted all night.”

The Eagles’ only other score came with 4:35 remaining in the game when Burkett returned a kick 98 yards for a touchdown.

With Brooks sidelined, sophomore Jake Gillem booted both point after attempts through the uprights.

Kickoff for the Eagles showdown with Kingwood Christian is set for 7 p.m.