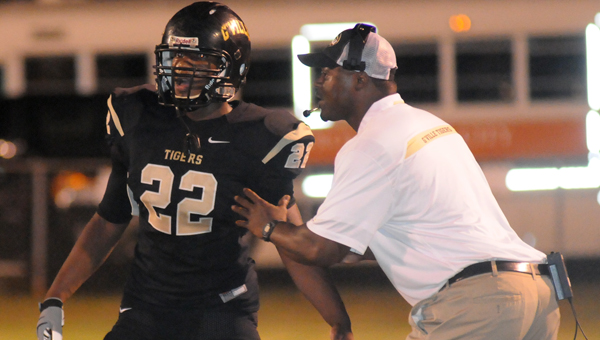 If football games were played on paper, Greenville High School could go ahead and chalk up a win over Class 4A Wilcox Central High School.

But the games are played on the field. And on the field, statistics carry about as much weight as the paper they are printed on.

That’s the message Greenville head coach Earnest Hill is preaching to his players as they enter the final week of the regular season.

“We can’t think we’re just going to walk out on the field and beat anybody,” Hill said. “Whether it’s a region opponent or a (Class 4A) opponent or a middle school team, we’ve got to come ready to play every week. We aren’t world-beaters. We haven’t earned the right to think we can just walk over anybody.”

The Tigers are 0-2 against Class 4A teams this season. Greenville was defeated 25-20 by Anniston High School and 27-26 by Charles Henderson High School.

That’s one statistic Hill doesn’t plan to let his team forget as it prepares for Wilcox Central.

“We’ve got to come out focused,” Hill said. “Wilcox has only won three games, but we have a short week, and we’ve got to make sure we get better on both sides of the ball to give ourselves a chance to win the game. It doesn’t matter if they are 4A, 5A or 6A. Anybody can win on any given night.”

While the Jaguars (3-6) have struggled of late, losing their last four games by a combined score of 130-18, Hill said their athleticism makes them a dangerous opponent.

“They have good athletes,” he said. “They go out and play hard, and if you don’t do what your supposed to do and play your assignments, they can make big plays.”

“When we get a chance to make a tackle for a loss we’ve got to make it,” he said. “We’ve got to tackle. We can’t give them a chance to break a big play on us.”

Greenville travel to Camden to take on the Jaguars Thursday. Kickoff is set for 7 p.m.

The game will wrap up Greenville’s season after the Alabama High School Athletic Association announced Tuesday that the Tigers must forfeit wins over Citronelle, Satsuma and Sumter Central after self-reporting to the AHSAA that an academically ineligible student played in three victories this season. Greenville will also receive a monetary fine and be placed on probation for a year.

The forfeits will keep the Tigers out of the postseason.