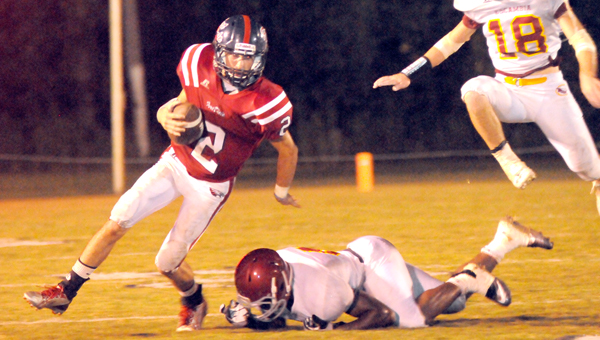 No. 9 Fort Dale Academy will face a Wilcox Academy team Friday night that has won three of its last four contests.

If that wasn’t a tough enough challenge, the Eagles will do so without several key players, including starting quarterback Chip Taylor, who is out for Friday’s contest after injuring his ankle during the Eagles’ 52-36 loss to Edgewood Academy.

“We’re going to have to play without some,” Fort Dale head coach James “Speed” Sampley said. “We’ve got some guys that are banged up, and won’t be able to go, so we’ll rest them and hopefully have them back for the start of the playoffs.”

But first, the Eagles will attempt to snap a two-game losing skid by beating the Class AA Wildcats (6-3).

Sampley said the Wildcats, who average 24.6 points per game, will attempt to control the game’s tempo by keeping the ball on the ground and keeping the Eagles’ offense on the sidelines.

“They’re large up front, and we’ll have a hard time pushing them around,” Sampley said.

“They’re going to line up with two backs and center the ball with about two or three seconds on the play clock, and try to control tempo and lull us to sleep and then break a big play.”

That philosophy couldn’t be more different than the Fort Dale’s up-tempo approach.

The Eagles like to snap the ball quickly on offense, but Sampley conceded that their tempo might be a bit slower with sophomore Austin Vickery under center.

“Our tempo may change some with Austin at quarterback, but we’re still going to do what we do,” Sampley said. “We need to come out and play well to prepare ourselves for the playoffs.”

Fort Dale and Wilcox will face off at 7 p.m. in Greenville.