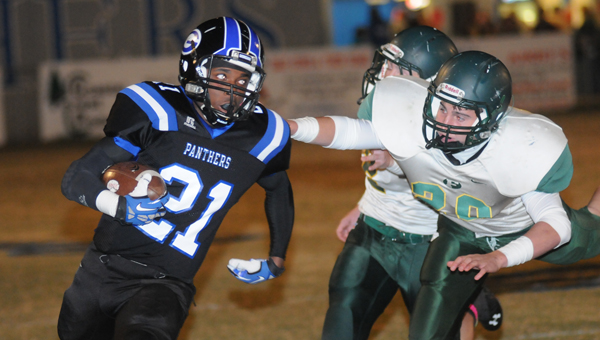 “We still have a long way to go,” Georgiana head coach Ezell Powell said. “We’ve got a lot to learn. Tonight we saw what it takes to play physical and beat a team like that.”

Georgiana (4-5, 2-5 Class 1A, Region 2) trailed the Wildcats by just four points heading in the final quarter of play, but a failed fourth down conversion attempt and a questionable call on a fumble that appeared to have been blown dead, opened the door for the Wildcats.

Florala converted both turnovers into touchdowns to take a 32-14 lead with just under eight minutes to play in the game.

“We kept them in check for a while, but there at the end we made some mistakes and they busted us for big plays,” Powell said.

With 4:57 to play, Georgiana senior running back Latrell Seals scampered into the end zone from 10 yards out for his third touchdown of the night. Junior quarterback Alen Smith then found sophomore wide receiver Demarcus Rich in the end zone on the two-point conversion attempt to cut the Wildcats’ lead to 10 points.

The Panthers attempted an onside kick, but the Wildcats were ready and with a short field, it wasn’t long before Florala was back in the end zone to seal the win.

“I appreciate the way our kids kept fighting,” Powell said. “They didn’t quit. They kept playing the whole game.”

Georgiana will be back in action Friday night when it travels to face Highland Home High School. Kickoff is set for 7 p.m.