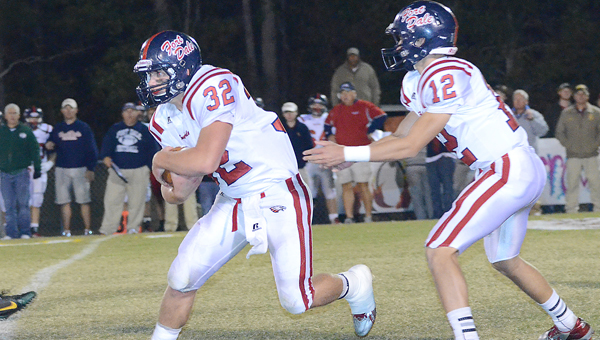 By Jim Plott
Special to the Advocate

But the Wildcats spotted the Eagles a 13-3 first quarter lead before roaring ahead in the second. Edgewood never trailed again.

Fort Dale chalked up the next two scores. The first was a 20-yard touchdown run by quarterback Chip Taylor. The point after gave the Eagles a 7-3 lead with 4:05 left in the first stanza.

Taylor pushed into the end zone again on a 10-yard carry. The PAT failed, but Fort Dale stretched its advantage to 13-3 with 37 seconds to go.

Edgewood struck three times in the second quarter. Crawford scored on runs of 5, 9 and 4 yards, giving the Wildcats a 24-13 halftime lead.

Fort Dale closed the gap to 24-20 on a 19-yard pass from Taylor to Blake Harris with 7:34 remaining in the third period.

The Wildcats answered at the 4:12 mark on a 14-yard Crawford run to go up 31-20. The TD came after Edgewood stopped Fort Dale on a fourth and inches at the 29.

Taylor took it in for another Eagles’ touchdown seconds into the final period. Ryan Burkett carried for a two-point conversion to cut Edgewood’s lead to 31-28.

The Wildcats posted the next two scores.

Jackson Tate connected on a 47-yard pass to Jake Sisson with 7:16 left in the game. The PAT sailed wide.

Crawford took it across on a 4-yard run with 3:09 remaining. A two-point conversion pass extended Edgewood’s lead to 37-28.

The two teams exchanged TDs in the final minutes. Fort Dale’s Austin Vickery scored on a 5-yard carry, followed by a conversion run by Burkett.

Crawford finished out Edgewood’s scoring on a  48-yard kickoff return. The point after was good.

“It was a game of momentum, bottom line,” said Edgewood coach Bobby Carr. “When we had the momentum we held on to it.”

Crawford had 18 carries for 129 yards and was 6-of-12 passing for 114 yards on the night. Carr had praise for his quarterback.

“Everyone is on the bus and he’s the bus driver. Josh is a heck of a player and an even a better person.”

Fort Dale coach James “Speed” Sampley said the contest was all about offense.

“I know we didn’t play with much if any defense,” he said. “I have to give Edgewood credit — they’re a good team.”

He added that the yearly matchups are friendly.

“It’s a respectful rivalry,” said Sampley. “We’ve agreed to play each other every year.”

Peggy Blackburn contributed to this report.