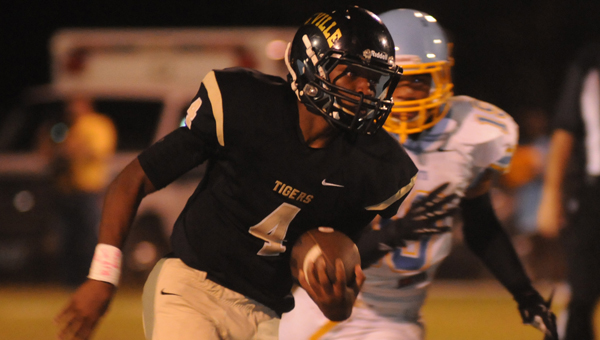 Come Friday, Greenville High School will once again be burning up the highway.

For the second consecutive week and the third time in the last four weeks, the Tigers will hit the road for a key Class 5A, Region 3 showdown, this time with Sumter Central High School.

And while the Tigers have won just one game on the road this season, an 18-16 victory over Demopolis High School, third-year head coach Earnest Hill said the Tigers enjoy the challenges presented by playing on the road in front of a hostile crowd.

The Tigers (3-5, 3-3 Class 5A, Region 3) need to bring a win back to the Camellia City to keep their playoff hopes alive.

“We’ve put ourselves in a situation where we’re going to need some help to get in,” Hill said. “We haven’t talked a lot about that because none of it matters though if we don’t take care of business.”

Hill said the Tigers, who have lost three of their last four games, have to find a slow down the Jaguars’ offense.

In Greenville’s three wins this season, the Tigers have held their opponents to 16 or fewer points.

In their five losses, the Tigers have allowed an average of 31.4 points per game.

“We haven’t scored a lot of points this season, so we’re going to have to find a way to slow them down and keep them out of the end zone,” Hill said.

While the Jaguars average just 15.1 points per game, Hill said they have plenty of playmakers that will challenge the Tiger defenders.

“They have athletes,” he said. “They like to throw the ball around and they have kids that can make plays.  We’re going to have to find a way to stop them and not give up big plays to give ourselves a chance to win the game.”

Greenville and Sumter Central will face off at 7 p.m. in York.