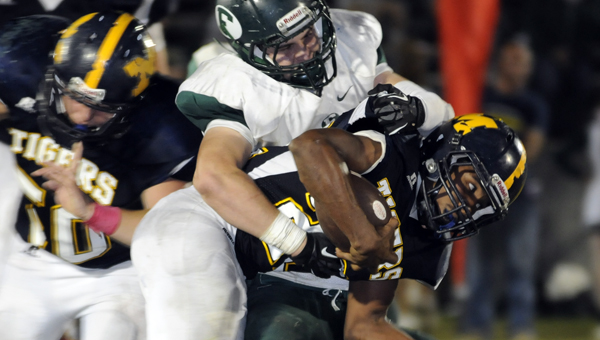 The Florala Wildcats proved Friday night that fourth downs are for more than just punting, but one decisive fumble on fourth down swung the momentum — and the game — permanently in McKenzie School’s favor as the Tigers went on to claim a 52-30 victory.

The first half was nearly all offense as McKenzie running back Anthony Grace charged down the sideline for a 44-yard touchdown on a risky fourth-and-short.

But the Wildcats had their own answer in running back Austin West who stormed through a sea of McKenzie jerseys on the third play from scrimmage to even the game.

The Tigers took to the air on their second drive as quarterback William Brown found fellow freshman Chris Shufford on a 34-yard strike to the back of the end zone for McKenzie’s second score.

Unfazed, West would give the Tigers defense an encore performance with the exact same play up the middle, this time on the second snap from scrimmage, for an 82-yard touchdown.

But it was the final, clock-eating drive of the half that sucked the enthusiasm out of the stadium as the Wildcats converted on three separate fourth downs and duped the McKenzie defense with a halfback pass into double coverage for a surprise score to end the half trailing the Tigers just 28-24.

Though the Tigers had the lead, the momentum belonged to the Wildcats, and McKenzie head coach Josh McLendon knew adjustments had to be made.

“We got together as a staff and one thing we did was move our linebackers back a little bit and allowed them to basically just play football,” McLendon said.

“We allowed them to read and see what was happening in front of them. We changed coverages a little bit and got the safeties more involved, but the biggest thing was the linebackers and the defensive line and giving them a chance to make some plays.”

And make plays they did, as the Tigers stopped the Wildcats on the first drive with a pivotal red zone interception from defensive back Nicarius Peterson that gave the McKenzie defense time to regroup.

Appropriately, the biggest play of the night would belong to the Tiger defense as Peterson forced a fumble on a Wildcat fourth down and took it in for a touchdown — the last score the Tigers would need.

Peterson, who played key roles on all sides of the ball, said that the coaches’ wakeup call at halftime was exactly what he needed to hear.

“It’s nothing we hadn’t seen before, and we knew we had to come out in the second half and compete,” Peterson said. “In the first half, they shouldn’t have even have been playing with us because we were giving up stuff with dumb penalties, but we just had to play.”

The Tigers travel to Pleasant Home next Friday for their final region game of the season.