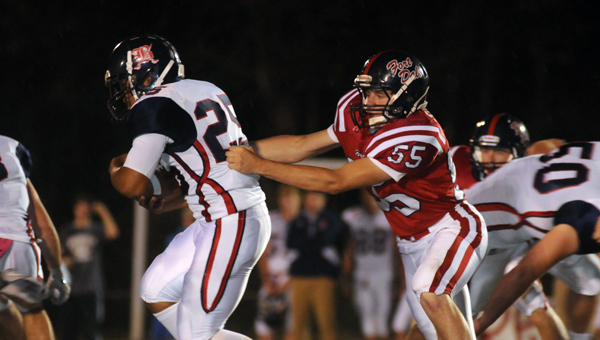 It’s not fair that No. 6 Fort Dale Academy will have to study the film on Friday’s contest.

It’s not that No. 5 Bessemer outscored the Eagles 34-21. The Rebels have beaten plenty of other teams, some far worse.

But the mistakes that sunk the Fort Dale’s comeback bid were difficult for the Eagles (6-2) to watch in real time, let alone relive during film study. Mainly because the Eagles know that the mistakes were the difference in winning and losing.

With the game tied 21-21 early in the fourth quarter, the Eagles made the first of several costly mistakes.

On third-and-17, Fort Dale senior quarterback Chip Taylor attempted to pitch the ball to junior running back Ryan Burkett on an option play. The pitch was off the mark and Bessemer pounced on the loose ball.

On the ensuing drive, the Eagles moved the ball all the way to the Bessemer 5-yard line, but an incomplete pass on fourth-and-4 ended the drive and gave Bessemer an opportunity to run out the final 4:30 of the contest. But Fort Dale’s defense had other plans.

The Eagles held and gave the ball back to their offense with 1:26 remaining to play.

A pass interference call on second-and-goal moved the Eagles to within two yards of the end zone. A score looked inevitable, but the Rebels overpowered the Eagles on the ensuing play and tackled Taylor for no gain. On third-and-goal, the Eagles went back to the air, and Taylor was picked off in the end zone. The interception was returned 100 yards for a score.

“That interception was my fault,” Sampley said. “I thought we would be able to hit the slant inside, but it wasn’t there and Chip had to hurry and throw the dig because he can’t take a sack there. That’s on me. That’s bad coaching.”

Fort Dale led early, capitalizing on two interceptions to take a 14-0 lead. The first came on a 19-yard run from Taylor, while the second was a 30-yard run from Burkett.

Fort Dale’s final touchdown was a 2-yard run from Taylor, who completed 10-of-22 attempts for 181 yards.

Burkett led FDA with 80 yards rushing on 12 carries, and Poole led the Eagles’ receivers with six receptions for 98 yards.

Burkett, Austin Vickery and Maurlan Dickerson each had an interception for the Eagles. Chase Whiddon paced the defense with 13 stops.

Fort Dale will be back in action next Friday when it takes on Edgewood.