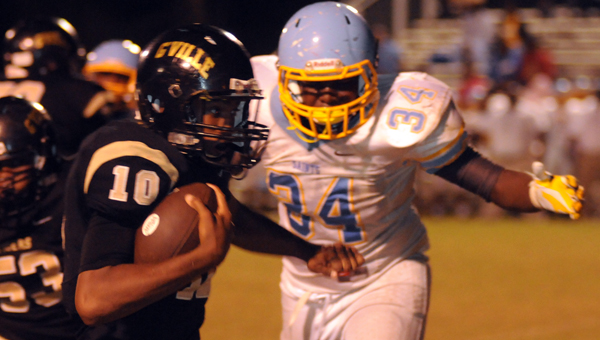 The Saints (4-3, 2-3 Class 5A, Region 3) intercepted five Greenville passes, including two in the end zone to thwart Greenville scoring opportunities.

A third Greenville pass was picked off and returned to the Tigers’ 5-yard line by sophomore linebacker Aderick Moore. That interception set up a 5-yard touchdown run by senior running back Cinque Coles, which put the Saints ahead by two touchdowns.

“That interception was huge,” Selma head coach Leroy Miles said. “That was the turning point of the game.”

The Saints took an early lead on the Tigers (3-4, 3-2 Class 5A, Region 2) when quarterback Jesse Boggs scored from 7 yards out on the final play of the first quarter. Rashawn Reeves’ point after attempt gave Selma a 7-0 lead.

After a scoreless second quarter, the Tigers knotted the game at 7-all when junior quarterback Draylen McGrew barreled into the end zone from a yard out and sophomore Marlon Davidson split the uprights.

The Saints responded on their very next possession. Senior running back Adam Bruno capped the scoring drive with a 1-yard touchdown run with 4:33 to play in the third quarter. Reeves’ point after attempt gave Selma a 14-7 lead.

Greenville cut the lead to a single score with 3:02 remaining in the game when McGrew found junior Javarrius Cheatham for a 54-yard touchdown. Davidson’s extra point made it a 21-14 game.

With 2:32 to play. Greenville senior DeBryant Crenshaw intercepted a Selma pass at the Tigers’ 34-yard line giving Greenville a shot to tie the game. But three plays later the Saints would tally their fifth interception of the night to seal the win.

“We knew it was going to be a fight,” Miles said. “Coach (Earnest) Hill does a great job with this program. That’s a tough football team. That game was a dogfight and we knew it would be coming in here. We were very fortunate to get a win. My hat is off to this team. That’s a big win.” 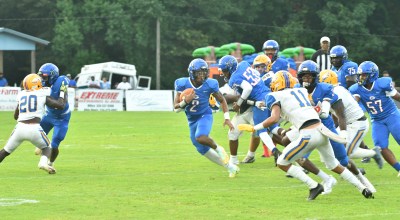