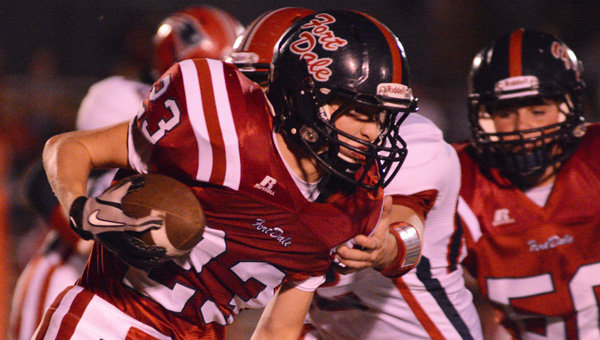 With the win eighth-ranked FDA improved to 6-1. Pike saw its record fall to 1-6.

The Eagles scored early and often in this one, racing out to a 34-0 lead at the half. On Fort Dale’s opening drive the Eagles moved 58 yards in just four plays with quarterback Chip Taylor hitting James Burkett from 10 yards out for the score. Trent Brooks booted the extra point for a 7-0 lead at the 11:13 mark of the first period.

On that opening drive Taylor reached a milestone when he found Brooks on a 20-yard gain to break Hunter Armstong’s career passing record for Fort Dale Academy. Taylor became the first Eagle quarterback to surpass 4,000 yards in his career later in the half.

Ryan Burkett posted FDA’s second score of the evening on a seven-yard scamper. Brooks’ extra point made it 14-0 with 4:40 to play in the first quarter.

The Eagles’ capped a two-play, 52 yard drive with 45 seconds to go in the first quarter when Sawyer Kendrick raced nine yards for a touchdown. Once again, Brooks extra point was successful for a 21-0 FDA advantage.

Caleb Whigham found the end zone midway through the second period when he ran 21 yards for a score around right end. Brooks’ extra point with 5:56 to play in the half stretched the Eagles’ lead to 28-0.

The defense posted Fort Dale’s final touchdown of the night minutes later when James Burkett picked off a Pike pass and ran 48 yards for a touchdown. The extra point attempt failed but with 4:35 to go in the half the Eagles had all the points they would need at 34-0.

With FDA Coach Speed Sampley substituting liberally in the second half, the Patriots put two touchdowns on the board. The first came early in the fourth quarter on Cameron Crowe’s one-yard run. With 2:16 left in the game John David Cox scored on an 18-yard pass from Drew Starling.

Fort Dale finished the night with 348 yards of total offense with 232 of that total coming through the air. Taylor was six of nine for 116 yards while Austin Vickery completed three of seven attempts for 116 yards. Brooks caught two passes for 63 yards while Stephen Hartley had a 67-yard reception.

Cody Parker led the Eagles’ defense with 13 tackles and a sack. Deaton Owens had 11 stops and a sack while Blake Harris had an interception.

FDA will be at home next week when it plays host to Bessemer.

Greenville native returns to the Ritz