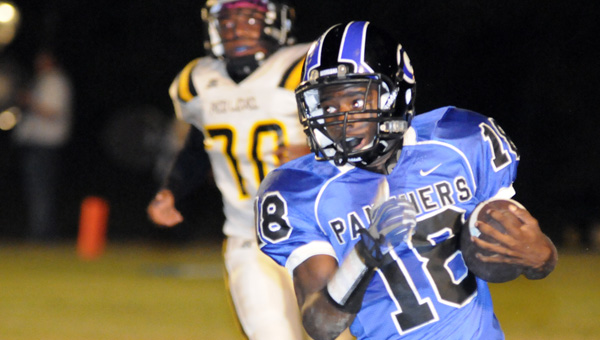 While Harmon Field was abound with homecoming celebrations, it was all business on the turf as the Georgiana Panthers handily put away the Red Level Tigers 48-6.

Senior running back Latrell Seals got the ball rolling for the Panthers with a diving lunge into the end zone with an unexpected push from the Tigers’ defense for the first score of the night, jumping Georgiana to an early 8-0 lead with barely two minutes off the clock.

After forcing a quick three-and-out, Seals would follow his score with a second off a lightning-fast burst up the middle, running virtually untouched for a 40-yard score and a 14-0 lead.

Meanwhile, the Tigers struggled to mount a response with a smothering Panther defensive line that ended most efforts in the backfield before they could develop.

The second quarter saw a more balanced Georgiana attack, as quarterback Jacquez Payton exercised his throwing ability to connect with wide receiver Tarien Crittenden on back-to-back fade routes to the back pylon of the end zone for touchdowns.

“We ran the ball well, we threw the ball pretty well and we were able to get up early and play some really solid defense,” said Georgiana head coach Ezell Powell. “We did some really good things early on in the ball game that helped us get the lead and keep it to get the win.”

And though the second half saw a renewed Red Level offense drive to within eight yards of their first score of the night, a fumble would kill any sense of momentum for the Tigers.

The unyielding Panthers defense would relent for one late-game Red Level score.