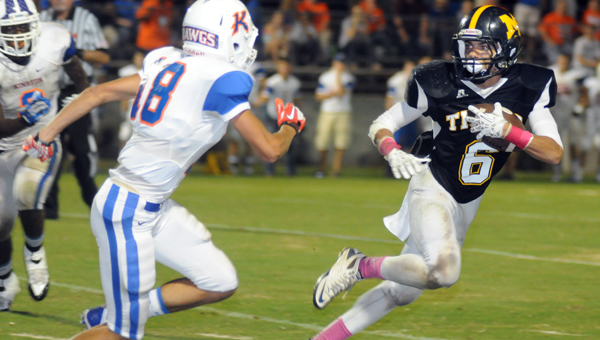 Fireworks lit up the sky above McKenzie School’s football stadium Friday night prior to the start of the Tigers’ homecoming contest with Kinston High School.

But the real fireworks show came once the game got started.

“I think I aged about 10 years tonight,” McKenzie School head coach Josh McLendon said. “I’ve got a few more gray hairs and I think I’ve got a bald spot starting. This was a stressful game. It was a stressful week.”

The Tigers used a number of big plays to overcome a sluggish start against the Bulldogs. With starters Nicarius Peterson, Terrance Clemons and Harper Vinson sidelined for the first quarter for violating team rules, McKenzie struggled to find a rhythm on offense.

“That hurt us because those guys are leaders on both sides of the ball,” McLendon said. “That made it more difficult, but we had other guys step in and make plays for us.”

With three of its starters on the bench, McKenzie fell behind 7-0 early in the first quarter.

At the start of the second quarter, the suspension was lifted and Clemons and Vinson immediately made up for lost time. On the first play of the quarter, Clemons connected with Vinson on a 53-yard pass that set up a 6-yard touchdown run by Clemons.

Vinson then found Condie Pugh in the end zone for the two-point conversion to give the Tigers an 8-7 lead.

“There’s no question those guys gave us a spark,” McLendon said. “They came in and made some big plays for us.”

Vinson also intercepted a pass with 2:30 remaining to play to end a Kinston drive that could have tied the game.

Late in the second quarter the Tigers would once again find themselves with Clemons, who injured his ankle on a run. He would miss the remainder of the contest.

“William did a good job,” McLendon said. “He was a little rattled early, but we were able to settle him down at half and he came up big for us.”

With the Tigers leading by a single score with 1:37 to play, Brown hit Pugh on a 29-yard gain to convert on third-and-11 and seal the win.

Anthony Grace added a pair of touchdowns for McKenzie. He scored on runs of three yards and 22 yards.

“This was a great team win,” McLendon said. “Everybody stepped up and did their job. I couldn’t be more proud of these guys.”