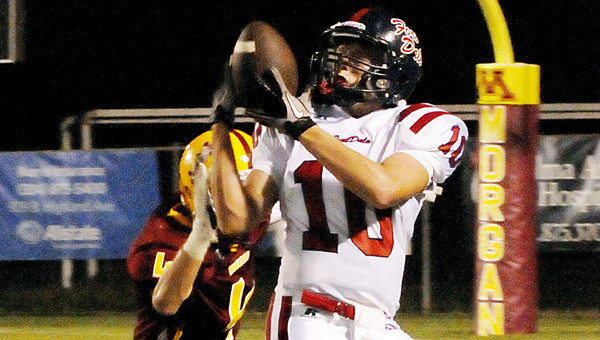 By DENNIS PALMER
The Selma Times-Journal

SELMA — Chip Taylor completed 15-of-24 passes for 189-yards and added another 101 yards rushing to lead the Fort Dale Eagles to a 45-30 road win against the Morgan Academy Senators in a key region matchup.

The Eagles got out of the gate slowly, though, falling behind 6-0 after the Senators struck first when quarterback Harrison Adams connected with Chase Cammack on a screen pass in the flat for a touchdown.

Fort Dale answered early in the second half when Taylor found Trent Brooks for a 17-yard touchdown pass. Brooks also added the point after giving the Eagles the lead, 7-6.

Morgan (2-4, 1-2 Class AAA, Region 2) added a 30-yard field goal by Samir Freij to retake the lead, but it was short lived as Taylor led Fort Dale down the field and scored on a quarterback keeper from 47-yards out giving the Eagles the lead for good at 14-9.

The Eagles added two more touchdowns before the half on runs by Chase Whiddon and Ryan Burkett to carry a 28-17 lead into the locker room.

The Eagles (5-1, 3-1 Class AAA, Region 2) stretched their lead in the second half by adding a field goal by Brooks and two more touchdowns while holding Morgan to two touchdowns, with the last one coming as time expired.

Eagles’ head coach James “Speed” Sampley said his team, which allowed 62 points in their loss the prior week to Monroe, still needs to improve on defense or their trip to the playoffs might be short lived.

“We’re struggling to play defense,” Sampley said. “We’re not bad on offense, but we’ve got to get better because if we’re not any better in November than we are now we won’t go very far in the playoffs.”

Morgan head coach Bob Taylor said the Eagles would be a tough match for anybody in the playoffs.

“Offensively they’re probably as good as anybody we’ve played so far,” Bob Taylor said. “Chip Taylor has been running that offense for three years, and you can tell, and of course Coach Sampley and his coaches always do a great job. They’re going to be a tough team to beat come playoff time.”