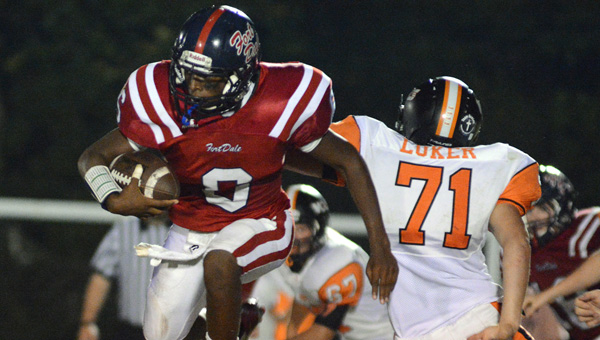 Fifth-ranked Fort Dale Academy saw its four-game winning streak come to an end Friday night as Monroe Academy’s high-powered offense ran over, around and through the Eagles for a 62-30 victory.

With the loss FDA dropped to 4-1. The sixth-ranked Volunteers improved to 5-0.

Monroe Academy quarterback Jake McKenzie stole the show with 256 yards rushing on 18 carries. Of that total 251 came in the first half as the Volunteers raced out to a 48-24 lead. In that half McKenzie scored on runs of 42, 67,  14 and 15 yards respectively. He also tossed a 22-yard touchdown pass to Kaleb Sessions.

Fort Dale took the early lead when Trent Brooks booted a 25-yard field goal on the Eagles’ opening possession. With 7:45 to go Watson Kennedy scored on a one-yard run to give Monroe a 6-3 advantage. Chip Taylor’s 72-yard touchdown strike to Ryan Burkett put FDA back on top 10-6 at the 7:23 mark of the first quarter.

Monroe reclaimed the lead minutes later on McKenzie’s 42-yard run. The PAT was good giving the Volunteers a 13-10 advantage. A one-yard run by Burkett put Fort Dale back in front with 3:21 showing on the clock in the first quarter. On the ensuing kickoff Monroe Academy claimed the lead for good when Sessions fielded a short kickoff and ran 57 yards for a score to put the Vols on top 20-17.

After Monroe moved out to a 27-17 advantage, Fort Dale pulled to within three when Taylor raced down the left sideline for a 73-yard touchdown, cutting the deficit to 27-24. Brooks kicked the extra point with 8:22 left in the opening half.

From that point on it was all Monroe Academy. The Volunteers reeled off 21 unanswered points to take a comfortable 24-point lead to the locker room at halftime.

In the second half MA posted touchdowns on a 30-yard run by Sessions and a 45-yard touchdown toss from McKenzie to Caleb Smith to move out to a 62-24 lead with just over six minutes remaining in the game. Fort Dale backup quarterback Austin Vickery scored the Eagles’ final points on a 65-yard run with 5:16 left to play.

Fort Dale had 431 yards total offense with 219 of that coming on the ground. Taylor led the way with 10 carries for 87 yards. The senior signal caller also threw for 212 yards on four of 10 completions. Burkett grabbed two of those tosses for 101 yards and one score.

Monroe amassed 568 total yards of offense, including 487 on the ground.

Caleb Whigham paced Fort Dale’s defense with a team-high 13 tackles. Chase Whiddon was in on 12 stops while Blake Harris had 11.