No. 3 Trojans slip past Tigers 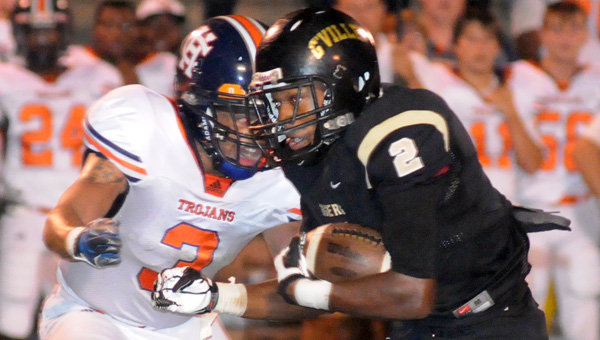 The win marked the second time in as many tries that the Class 4A Trojans have topped the Class 5A Tigers by a single point.

“That’s a heck of a football team,” Greenville High School head coach Earnest Hill said. “We played them to the wire. Now we know what we can do.”

But the Trojans didn’t get to celebrate for long.

On the ensuing kickoff Greenville senior Michael Smith returned the kick 80 yards for a touchdown to draw the Tigers (2-3, 2-1 Class 5A, Region 3) to within a single point.

Smith, who also intercepted a pass in the end zone midway through the final quarter, said he saw a seam and ran for it.

“I just had faith in my teammates and confidence in myself,” he said. “I believed in my teammates. I felt like when we got that touchdown we were going to come back and win the game.”

The Trojans were able to keep the ball on the ground, picking up first downs along the way, to run out the final 3:50 of the contest and seal the win.

“Those one point games are the worst ones to swallow,” Hill said. “At the same time that’s the best effort we’ve had this year, and it started in practice. We had good days at practice and it showed. We’ve still got to play four quarters though. I think we played about two and half tonight.”

Greenville staked claim to an early lead when junior lineback Mal Caldwell intercepted a pass near midfield and returned it for a touchdown. After the point after attempt was blocked, Greenville led 6-0.

In the second quarter, Charles Henderson took the lead on a 49-yard scamper by John Johnson and a successful point after attempt by Kareem Pritchett with 9:09 to play in the half.

The Trojans added a second touchdown in the quarter when Mondarius Dixon found his way into the end zone from four yards out with 6:48 to play. The point after attempt gave the Trojans a 14-6 lead.

Greenville answered with a pair of touchdowns to open the second half.

Junior Alyric Posey barreled into the end zone from 15 yards out with 8:34 to play and then ran in the two-point conversion attempt to knot the game at 14-all.

After Greenville senior Devonta Crittenden pounced on a Trojan fumble, Posey once again found the end zone, this time from six yards out. The two-point conversion failed and Greenville led 20-14.

Four minutes later, Charles Henderson quarterback Austin Ingram rushed for a 1-yard touchdown to give the Trojans a 21-20 lead. It’s a lead the Trojans would not relinquish.

Greenville will be back in action next Friday when it takes on region-rival Demopolis.