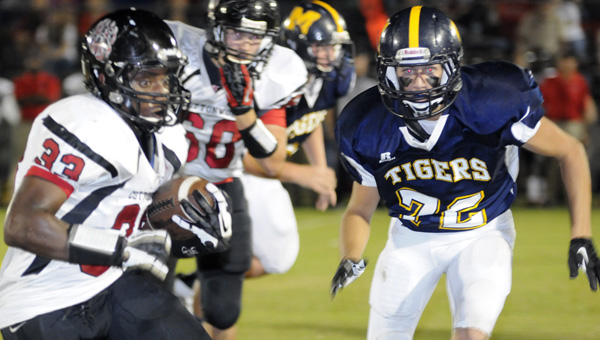 For the second week in a row, the McKenzie Tigers rallied from behind to knock off a previously unbeaten opponent.

This time it was a 44-30 victory over the Class 2A Cottonwood Bears.

However, the Tiger defense stumbled out of the gate as Cottonwood blazed down the field with an aerial assault in 3:23 seconds for the first seven points of the night.

But the Tigers would answer in kind almost immediately, led by running back Anthony Grace, who put the finishing touches on a 59-yard drive with a nine-yard sprint for pay dirt, his first of several rushing touchdowns of the night.

Things took a southward turn for the McKenzie defense as the Bears found their stride offensively, picking the Tiger secondary apart with a flurry of precise passes that often found their target.

In the blink of an eye, the Tigers found themselves trailing 22-7.

McKenzie head coach Josh McLendon’s response to the deficit was simple — he said nothing.

“They don’t hang their heads and there’s no finger pointing — they just play, and that’s a testament to them,” McLendon said. “As coaches, we try to put them in those positions, but they’ve got to make the plays.  It’s a special group of kids.”

With minutes remaining in the first half and a huge touchdown catch for receiver Condie Pugh that covered half the field, the Tigers managed to even the score at 22 with a minute to spare.

But the biggest turning point of the night would follow as linebacker Harper Vinson recovered a fumble deep in Bear territory at the 18-second mark, setting the Tigers up for a short drive and a pivotal last-second touchdown for the 30-22 lead at the half.

“The whole time, I was thinking ‘just get on the football,” Vinson said. “It was all about just coming out and executing.  With all the talk about how they’re 2A and we’re 1A, we were just underestimated. It was a big win for us.”

The proverbial nail in the coffin came at the hands of receiver Nicarius Peterson early in the third on a 27-yard run on a clutch fourth-and-nine conversion to give the Tigers a comfortable 16-point cushion that the McKenzie defense rode out for the duration of the second half.

It was thanks to that offense, according to McLendon, that the defense was able to make adjustments for the Bears’ aerial barrage in the second half.

“The big thing was we were able to control the ball offensively, so that kind of put them in a bind so that we would know what they had to do,” McLendon said. “Once we were able to get a lead and get ahead, it kind of frees you up a little bit.  We were just fortunate enough to make some plays and come out of here with a win.”

McKenzie plans to defend its homecoming honor against Kinston next Friday at 7 p.m.