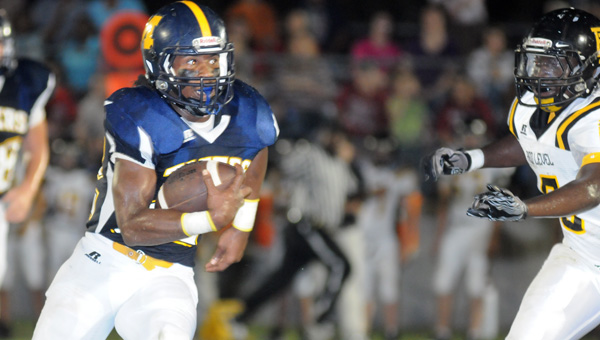 McKenzie School running back Anthony Grace breaks free for a touchdown run during the first half of the Tigers’ 47-0 win over Red Level High School Friday night in McKenzie. (Advocate Staff/Andy Brown)

The McKenzie Tigers proved Friday night that they were cut from a different cloth as they trounced the Red Level Tigers in a 47-0 shutout at home.

For McKenzie head coach Josh McLendon, the name of the game was starting fast and finishing fast, and it was a goal that McKenzie achieved emphatically.

Wide receiver Nicarius Peterson got the ball rolling by taking a handoff and running across the length of the field to the weak side of the play where, after a stiff arm and several blocks downfield, he would punch it in for a 42-yard touchdown run.

Running back Anthony Grace would follow up barely four minutes later by storming 60 yards downfield behind a sea of McKenzie jerseys to give the Tigers an early 13-0 lead with four minutes remaining in the first quarter.

But the quickest score of all would come at the end of the first, in which a blistering McKenzie hurry-up offense left Red Level on their heels and down 19-0 in a drive that took less than a minute off the clock.

“We caught them a few times when they were dragging, and anytime we see a team dragging a little bit we’re going to try to push the tempo a little bit to take advantage of that,” McLendon said.

“And we were able to do that a couple of times tonight.”

A 33-0 lead going at the half allowed for many of the McKenzie starters to rest up in the second half, but the upbeat tempo remained constant as freshman running back Chris Shufford tacked on six with a 34-yard run late in the fourth quarter to perhaps the loudest cheers of the night.

But the decision to play second stringers wasn’t just a common courtesy, but also because the extra help will be needed with next week’s tough opponent, No. 6 Geneva County High School.

“Our biggest thing was that we wanted to get some guys in to get some experience because we knew we had a big game next week,” McLendon added.

“They are one of the top teams in 1A, so that’s going to be able to tell us where we stack up against a team like them.  They’re going to be tough — it’s going to be a tough place to play, but we’re looking forward to the challenge.”

Grace ended the night with three rushing touchdowns for 40, 9 and 3 yards apiece.

The perfect Tigers will travel to face the undefeated Geneva County Bulldogs next Friday. Kickoff is slated for 7 p.m.