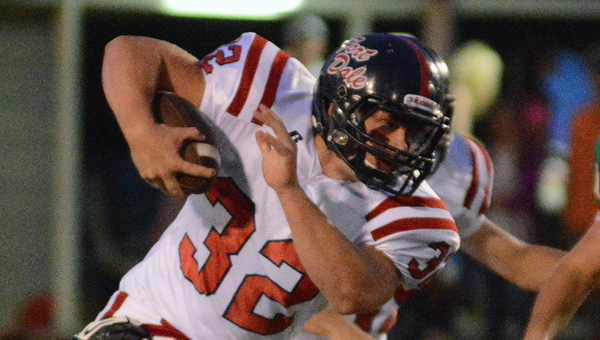 Fort Dale, led by senior quarterback Chip Taylor, raced out to a 21-0 lead by the close of the first quarter. Taylor, who rushed for a team-best 108 yards, ran for scores of 9 yards and 78 yards and threw a 25-yard touchdown pass to junior Ryan Burkett in the game’s opening period.

Senior Chase Whiddon, who rushed for 96 yards on 11 carries, scored on a 2-yard run in the second quarter and Taylor and Burkett hooked up for a 27-yard throw and catch late in the half to take a 35-7 lead into the break.

Taylor found sophomore Steven Hartley for a 17-yard touchdown just six seconds into the final quarter of play to extend the FDA lead to 42-7.

With subs on the field for the Eagles, Hooper scored on runs of 76 yards and 77 yards before FDA backup quarterback Austin Vickery capped the scoring with a 66-yard touchdown run.

Taylor finished the contest 12-for-16 passing for three scores.

Burkett led the receiving corps with three catches for 59 yards and two touchdowns, while Vickery caught two passes for 42 yards.

Whiddon led the Eagles with 12 tackles. Junior Sawyer Kendrick recorded 11 stops and senior Blake Harris had 10 tackles and an interception.

The Eagles will be back in action next Friday when they hit the road to take on Autauga Academy. Kickoff is set for 7 p.m.