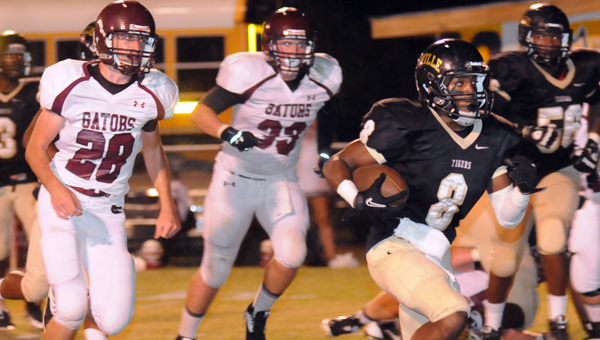 Greenville High School senior Tremaine Jones races past a Satsuma defender for an 8-yard touchdown in the Tigers’ 47-13 win over the Gators Friday night at Tiger Stadium. (Advocate Staff/Andy Brown)

After struggling to score points in their preseason contest and season opener, the Tigers erupted to score 28 second-half points en route to a 47-13 win over Satsuma High School Friday night at Tiger Stadium.

“This week we didn’t really do anything different,” GHS junior quarterback Jerome Watkins said. “We went over our old stuff and just came out and executed, and had fun doing it.”

Watkins, who threw for a touchdown and rushed for another, said he and the Tigers (1-1, 1-0 Class 5A, Region 3) gained confidence after marching down the field for a score on two of their first three possessions.

“We saw some things we could take advantage of,” Watkins said. “They played a lot of cover two and cover three. I knew when I saw cover three that I needed to go deep. When they were in cover two I knew I needed to throw over the middle. Coach told me to trust what I saw and believe in it, and I did that and we were able to move the ball.”

Satsuma got on the scoreboard with 3:03 left in the first half, but wouldn’t find the end zone again until 4:50 mark of the fourth quarter, thanks to a stingy Tiger defense that forced the Gators to turn the ball over on downs four times. Greenville also got a takeaway when junior Aquintas McDole intercepted a pass.

“I was proud of our guys and the way they came out and played in the second half,” GHS head coach Earnest Hill said. “They did what we asked them to do. We’ve just got to quit shooting ourselves in the foot. We still had a lot of mistakes and a lot of penalties. We can’t have penalties against great, great teams and have a chance to win. We’ve got to put teams away when we have the chance and quit giving them chances to get back into it, but overall, it was a good game. It was win, and we’ll take that anyway we can get it.”