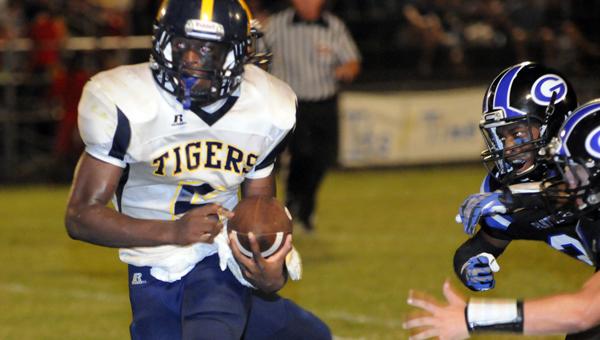 McKenzie School junior quarterback Terrance Clemons and the Tigers will travel to Georgiana Friday night for a showdown with in-county rival Georgiana School. Kickoff is set for 7 p.m. (Photo Courtesy of Bryan Campbell)

The temperature is rising in the southern part of Butler County, and it has nothing to do with the climate.

One of the most eagerly awaited football games comes early this year as neighboring rivals Georgiana and McKenzie square off in Week 2, and both teams are taking decidedly different approaches on the matter.

With the rivalry anticipation mounting, Georgiana head coach Ezell Powell is treating the matchup with his former school like business as usual.

“We’re just trying to go through the same routine, and improve ourselves as much as we can going into the ball game,” Powell said. “We’re trying to keep it all the same so the kids can understand that it’s another game just like the game we had last week, and keep them all as calm as possible.”

McKenzie head coach Josh McLendon, by comparison, is attempting to harness that energy as fuel for his players.

“You don’t want to try to peak too early with your emotions, and you want to try to save everything for 7 p.m. when the ball’s kicked off to let those emotions out then,” McLendon said. “Powell has done an amazing job of getting that program turned around in a short amount of time. We know it’s going to be tough, going over there to play those guys in Georgiana, but we’re looking forward to the challenge.”

The meeting carries with it not only bragging rights for another year — rights that McKenzie has enjoyed for the past five years — but also doubles as a regional win needed to make a bid for the playoffs.

Powell said that McKenzie is going to be a true first test for the Panthers, who nearly let a commanding lead slip through their fingers last week.

“I think they’re a solid football team, and they’re probably going to be the fastest defense we face all year,” Powell said. “They’ve done a good job of tackling and getting after people, so we’re just going to have to do the small things in order to make plays and avoid missed opportunities, because they may be few and far between this time compared to the next couple of weeks.”

“I think our main goal is to limit the amount of plays that they have on offense, and they have some big-time athletes on the offensive side of the ball with (Payton and Seals),” McLendon said. “I don’t know if we can or not — they’re playing really well on offense — but we’re going to have to play well to win, for sure.”

The Tigers and the Panthers will square off Friday at 7 p.m. at Harmon Field in Georgiana.