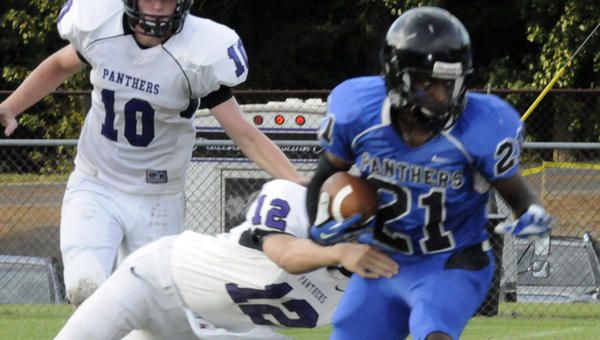 Georgiana School did something Friday night it hasn’t done since 2009.

It won its season opener.

The Panthers withstood a late rally by Ariton High School to score a 38-29 win.

“I hope this sets the tone for the rest of the season,” Georgiana head coach Ezell Powell said. “I’ve been telling our kids that if they will play hard on every play, great things will happen. Tonight we got great effort and we came away with a win.”

The Panthers did the bulk of their damage on the ground.

Sophomore quarterback Jacquez Payton rushed for four touchdowns and more than 200 yards, while senior running back Latrell Seals rushed for more than 100 yards and a touchdown.

“We played physical,” Powell said. “That’s what I wanted to see.”

While Georgiana dominated for much of the game, Ariton made a late charge with less than six minutes to play.

Three touchdowns in the final six minutes of the game nearly erased the Panthers’ lead.

“We had the game in hand, but our immaturity started to show and we let them back in the game,” Powell said. “We didn’t play all the way through, but we were able to hold on, and I was pleased with the way our guys kept fighting. We just have to play all four quarters.”

The Panthers will be back in action next Friday when they take on in-county rival McKenzie School at 7 p.m.  at Harmon Field in Georgiana.