No. 6 Eagles rally for win 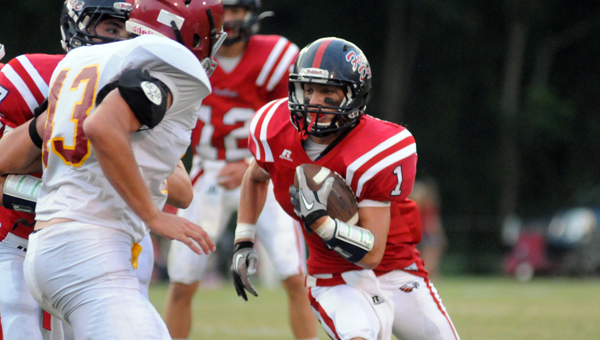 No. 6 Fort Dale Academy soared to last-minute 32-26 win over the Escambia Academy after an unlikely kickoff recovery set up one final drive with 43 seconds remaining in the game.

But it was nearly a game with a very different outcome altogether, thanks to a halftime scare as quarterback Chip Taylor went down on the last play of the first half with a dislocated finger.

As Taylor scrambled to answer the Panthers’ first score after an early 14-0 lead, the tip of his finger made contact with an opposing player’s helmet and popped it out of place.

“I was just running around, trying to get something to happen on the last play,” Taylor said. “It was a stupid play, and I should’ve just got out of bounds.”

Though a third-quarter trip to the hospital took care of the injury, the real damage was being down on the field where Taylor’s absence was all the more noticeable.

“We were going to have to run the ball, because (backup quarterback) Austin Vickery’s not comfortable throwing it a lot,” Sampley said. “But we did an OK job.  We kept the ball most of the time, which helped to get Chip back out there to run the offense.”

But Escambia took advantage of Taylor’s absence to swing momentum in their favor, scoring quickly as Chris Brown took a kickoff 75 yards virtually unscathed for a touchdown to bring the game to a 20-20 stalemate.

Things got even worse as a 65-yard bomb down the sideline set up the Cougars for their second quick score of the half, giving them a 26-20 lead — their first of the game.

However, the fourth quarter marked Taylor’s return and, as evident from the immediate 34-yard sprint down the sideline on his first touch of the half, it was as though he never left.

With minutes left to go in the fourth and no options downfield, Taylor scrambled for 79 yards behind some excellent blocking to give the Eagles a much-needed shot in the arm and an apparent shot at overtime.

But a botched kickoff return for Escambia set up Taylor and favorite target Ryan Burkett for a 35-yard dump pass for the final nail in the Cougars’ coffin.

Fort Dale finished the night with 449 yards of total offense, with 354 yards gained on the ground.

Fort Dale Academy will hit the road next Friday to take on Coosa Valley Academy.