Vigor too much for Tigers 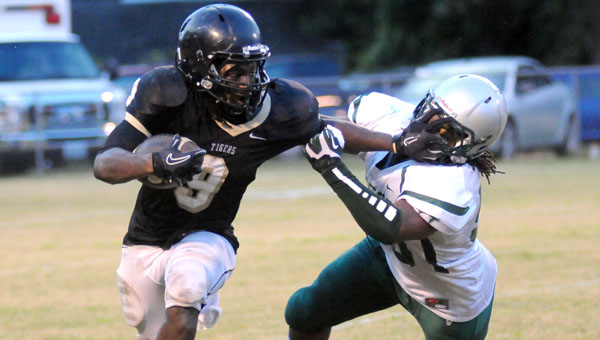 The Wolves, ranked No. 13 in the state, topped the Tigers 40-14 Friday night at Tiger Stadium, and certainly looked the part of one of the state’s elite teams.

“We played a good football team tonight,” Hill said. “I don’t think they are that many points better than us, but that’s a real good football team. That’s what we want to be. We want to be at the level of those teams in Mobile, because right now those are the teams to beat. We’ve got a long way to go.”

“We killed ourselves,” Hill said. “We struggled to move the ball and turned it over way too much, and on defense we didn’t do a lot. We missed some assignments and weren’t very physical. We didn’t play up to our capability on either side of the ball.”

Greenville, which debuted its new pistol offense, didn’t score until the 5:40 mark of the third quarter when junior running back Alyric Posey barreled his way into the end zone from three yards out.

Posey added a second touchdown with 9:33 remaining in the fourth quarter, this time from 10 yards out.

Sophomore Winston Simms booted both point after attempts through the uprights.

But by then the Wolves had scored 40 points and were mostly playing second and third stringers.

While Hill wasn’t pleased with the outcome, he felt like the game was productive for the Tigers.

“The good thing is this was a jamboree,” Hill said. “That’s why we play games like this against good teams. It shows us what we need to do to get ready for Week 1. We’ve got a lot to do, but we’re going to go back to work and get better.”

Greenville will open its 2013 campaign on the road against Anniston High School next Friday night. Kickoff is set for 7 p.m.