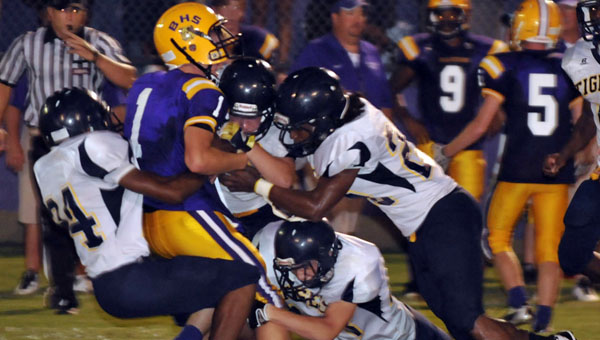 The McKenzie School defense swarms a J.U. Blacksher High School ball carrier Thursday night in a preseason game. The Tigers will travel to Highland Home Friday nigh to open the season. (Photo Courtesy of Bryan Campbell)

The first-year head coach praised his team’s effort and attitude during its final preseason tune up before opening its season Friday night on the road against Class 2A Highland Home High School, but McLendon knows his team’s performance was far from perfect.

“We’ve still got a long way to go,” he said. “I saw a lot of good things out there, but I’m sure there were a lot of negatives too. We’ve got to grade the film to see how we really did. Overall, though, I was pleased.”

McLendon said Thursday’s game with the Bulldogs was meant to be more of a measuring stick than anything else, and the Tigers showed marked improvement, especially on the defensive side of the ball.

“I was really proud of our defense,” he said. “They were very aggressive and did a good job of running to the ball and making plays. They played physical and that’s what we want from our defense. Coach (Tony) Norris did a  good job all week of coaching them up and having them ready to play, and I think they did a really good job for us, especially for a first game of sorts.”

While McLendon said the Tigers kept their offense “pretty basic,” McKenzie was able to move the ball effectively.

“(Blacksher) really did a good job of taking away our inside running game, but we were able to run outside and use our speed and athleticism to make plays,” he said. “That’s what we really want anyway. We want to get our athletes out in space and let them make plays for us.”

One of those players who made several big plays for the Tigers Thursday was sophomore Condie (CJ) Pugh. Pugh recovered a fumble for a touchdown and also caught a 40-yard pass for a score. He caught another touchdown pass that was called back due to a penalty.

“CJ really had a good game,” McLendon said. “We had a lot of players that played well, but (CJ) made several big plays for us (Thursday) night.”

While little went wrong for the Tigers Thursday night, McLendon did say that junior wide receiver Ty Adams would be evaluated this week for an injury suffered early in the game.

“He tweaked his ankle a little and we held him out of most of the game,” he said. “We’re going to have him checked out and hopefully he’ll be ready to go Friday night.”

McKenzie and Highland Home will face off at 7 p.m.