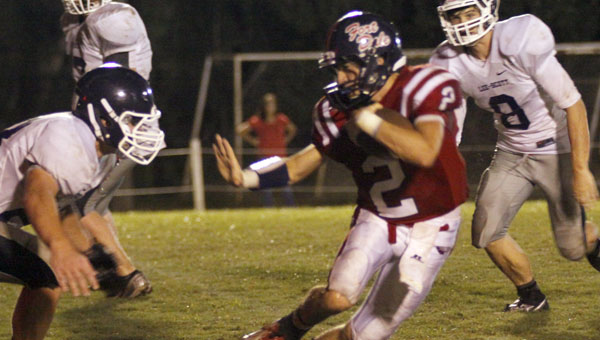 Three second-half touchdowns weren’t enough to lift No. 6 Fort Dale Academy to a win over Lee-Scott Academy Friday night in a preseason showdown at FDA.

“I feel like we did a good job tonight,” Fort Dale Academy sophomore Austin Vickery said. “We had a rough time considering three of our starting linebackers are out.  Once we eliminate making simple mistakes, get our three starting linebackers back and play as a team, we will play really well.”

Vickery scored three touchdowns in the loss, including a pair of 8-yard runs in the second quarter to cut Lee Scott’s lead to 14-12 before the Warriors tacked on three more scores before the close of the first half to take a 36-12 lead into the intermission.

Senior Chip Taylor added two touchdowns for Fort Dale in the second half, one on a 65-yard scamper, and Vickery added a 9-yard score to cut the lead to just four points with 10 minutes left to play, but the Warriors managed to hold  the Eagles scoreless for the remainder of the game and seal the win.

Vickery had an interception and junior Tyler Gibson had a blocked punt and a fumble recovery in the loss.

The Eagles will open the regular season Friday night at home against Escambia Academy.