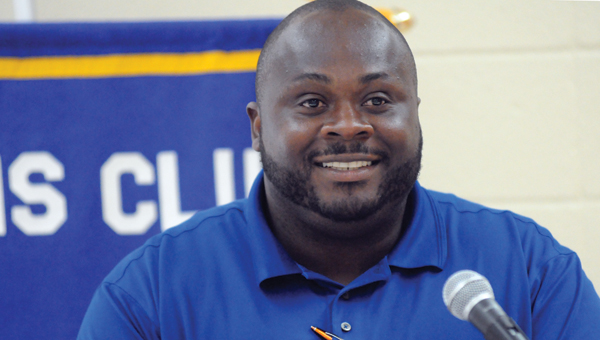 Two new coaches took their turn behind the microphone Tuesday at the Greenville Kiwanis Club’s annual Coaches Corner, but neither is a stranger to Butler County.

Georgiana School’s Ezell Powell and McKenzie School’s Josh McLendon are both in their first season at the helm of their respective programs.

Powell, who replaced David Watts, is the former defensive coordinator at McKenzie.

“We’re in a total rebuilding process,” Powell said. “We have some talented kids, but we still have a lot to learn about the game of football. We’re excited, though. We’ve been working hard this summer, and we’re ready to get after it.”

McLendon, a former Greenville High School assistant, is replacing Miles Brown, who was promoted to assistant principal at the school.

“I’m excited to be at McKenzie,” McLendon said. “It’s a special place. We have great kids who are working hard, and that’s all I can ask of them. We’re going to go out and compete and hopefully win some football games.”

The two first-year head coaches and their teams will face off Sept. 6 in Georgiana.

Powell said he’s expecting a hard-fought contest between the rivals.

Sampley, who has been at the helm of the FDA program for 15 seasons, said his team is also facing a rebuilding process, especially along its offensive line.

Junior Larry Harold is the only returning starter on the line.

“We’re starting over,” Sampley said. “Last year everyone on our line was a senior except for Larry, and the other kids didn’t play a lot, so we’re going to have to have some guys step up.”

Sampley also shrugged off the Eagles’ No. 6 preseason ranking.

“It doesn’t matter right now,” he said. “It matters what you’re ranked in November. It really doesn’t mean a thing right now.”

Hill, who is entering his third season at GHS, said he hopes his Tigers can “surprise” some people this season.

“We’ve got a tough schedule this season,” he said. “We play some good teams. We’ve got Demopolis and Saraland, who are probably the favorites to win our region, but we’re hoping we can sneak up on some folks and surprise them.”

All four schools will kick off their seasons Aug. 30.

Kickoff for all four games is set for 7 p.m.