Wuerffel challenges students to have a vision 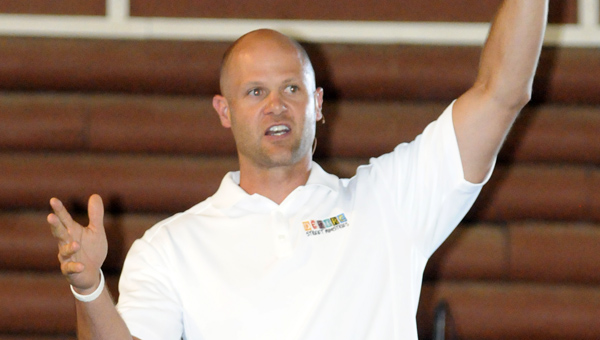 Heisman Trophy winner Danny Wuerffel speaks to a crowd of nearly 1,000 Friday night at the annual Back to School Bash in Georgiana. (Advocate Staff/Jonathan Bryant)

Sometimes, not even the greatest quarterback’s vision can allow him to see what’s most important.

More than 900 chairs were occupied under the Hank Williams Pavilion as the former Florida Gator delivered the night’s message, which came from 2 Corinthians 4:18.

“Thing things we need to see — the things that are important — aren’t always easy to see. What is seen is temporary, but what is unseen is eternal.”

Wuerffel shared five key tenets of seeing things differently so that the young athletes of Butler County might look at life from a different perspective.

The first lesson, that life is not about you, is one that Wuerffel said works in football as well as life.

He added that the three lies that the outside world often propagates — that life is about athleticism, the opposite sex and wealth — tend to overshadow the fact that there are truly only two goals that young athletes should aspire for; develop a relationship with God and strive to live for something greater than yourself.

Wuerffel’s life following his professional career indicates that he practices what he preaches, as his work with the non-profit, faith-based Desire Street Ministries organization has shown.

“After I retired, I began working there and became the director in 2006 after Katrina,” Wuerffel said.

“It’s a spiritual and community development ministry, so we help people with housing, education and healthcare. But it’s all driven through our faith and spiritual development, so we have Bible studies and start churches and we’re just trying to bring the gospel, word and deed to a community and see it change.”

Wuerffel’s other lessons touched on the inflated sense of self-importance that can plague athletes, stating that we aren’t that important in the grand scheme of things.

Wuerffel argued that one should ensure that his or her good deeds are backed by equally good intentions.

The final two lessons focused on developing a personal relationship with God, stating that God is more amazing that conceivably possible and that his love for us is greater than we could imagine.

And although the mentor-student roles have reversed for Wuerffel since the end of his football career, he added that he sees it as just another natural part of life.

“You’re always in a position where you’re learning from someone and growing and developing, and there’s always the chance, no matter what age you are, to give back to someone else that maybe isn’t quite as far along in the journey,” Wuerffel said.

“And so I just think that it’s a great responsibility and opportunity that we all have, whether it’s with our sons, whether you’re a junior in high school with incoming freshmen or whether you’re a Heisman Trophy winner and there’s hundreds of youth listening, we all get that opportunity to help someone else out on their journey.”