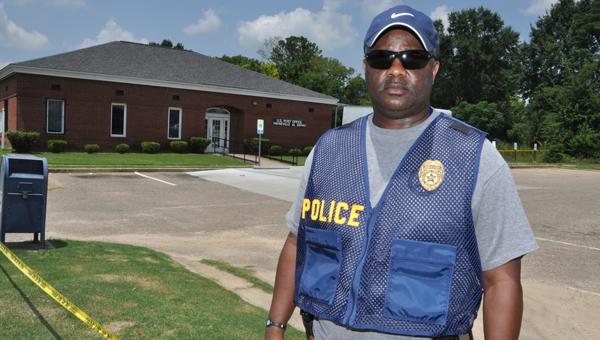 George Frazier, assistant postal inspector in charge with the U.S. Postal Inspection Service based in Atlanta, discusses an attack on a postal worker that occurred Thursday night at the Hayneville Post Office. The Hayneville Post Office was blocked off by crime scene tape Friday as authorities continued to investigate the shooting and robbery of the postal worker. (Advocate Staff/Fred Guarino)

The U.S. Postal Inspection Service is offering a reward of up to $50,000 for information leading to the arrest and conviction of the suspect or suspects who shot and robbed a postal truck driver at the Hayneville Post Office.

George Frazier, assistant inspector in charge from the U.S. Postal Inspection Service in Atlanta, confirmed the shooting on Friday.

He said the driver, who had been shot with a handgun, was in “stable condition” in an Intensive Care Unit at an undisclosed hospital in Montgomery on Friday.

“Needless to say, it was an unnecessary crime that was conducted on one of our employees or contractors,” he said.

Frazier said some mail was stolen, but that due to the ongoing nature of the investigation he could not provide any more information.

Frazier said anyone who saw anything unusual or suspicious in the area of the post office on Academy Lane and East Tuskeena Street should contact authorities.

The Lowndes County Sheriff’s Office and Alabama Bureau of Investigation are assisting with the investigation.