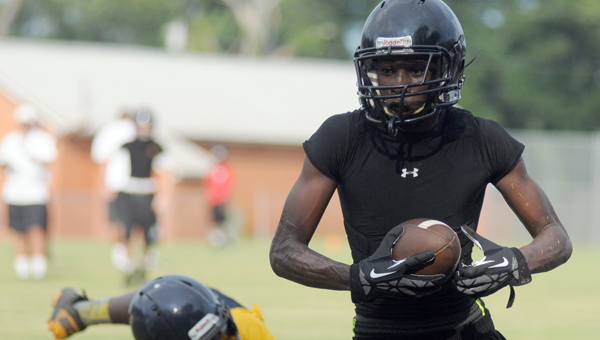 It was the standout performances of a few up-and-comers that shifted Greenville High School into high gear in a series of seven-on-seven games held in preparation for the upcoming season.

And although things got off to a slow start for the Tigers, head coach Earnest Hill said that he saw enough to get excited about.

“We started off kind of sluggish, and you could tell that we really hadn’t been in competition with anybody but ourselves, but we picked it up towards the end,” Hill said.

“But right now, we’re playing two quarterbacks and they’re just trying to find their way.  We’re playing some new receivers, and we actually saw some things out of our tall guys that can go up and get the football, so we were very excited about that.”

One of those standout players was Raheem Moore, a receiver who had previously been ineligible.  Moore’s 6-foot-4-inch frame made any jump ball pass a nightmare situation for defensive backs.

“We threw some jump balls to him and he just went up,” Hill said. “He plays basketball, and it was like he was just going up to get a rebound, and that was very impressive.”

Sophomore quarterback Winston Sims proved equally impressive to Hill, although Sims is currently one half of the passing game equation.

The Tigers have been rotating between two quarterbacks for much of the summer, since time spent in summer school provided a second back an opportunity for more reps at the position.

And although Hill said that a two-quarterback system isn’t necessarily permanent for the Tigers’ offense, the summer off-season does provide a unique opportunity to experiment.

“One kid can do some things that the other kid can’t, and vice versa,” Hill said. “I’m not saying we’re going to use two quarterbacks, but right now we’re just trying to figure out what we’ve got, and who’s going to be the best candidate for that job.”

But ultimately Hill doesn’t place too much stock in the results of seven-on-seven games.

Instead, the most important focus for him and his team is the desire to remain competitive.

“As a defensive guy, I don’t like it too much because it’s not too many quarterbacks that are going to have four seconds to throw the football,” Hill said. “But as far as on the offensive side of the ball, it helps the quarterbacks and receivers learn coverages and basically the chance to compete against another team is the one reason why we do it.  A win is great, but we just go out and try to compete against another team.”

And with the Tigers’ Aug. 30 season opener at Anniston looming ever closer in the distance, the opportunity to compete will be here sooner rather than later.

Fall practice begins in earnest for the Tigers on Monday.